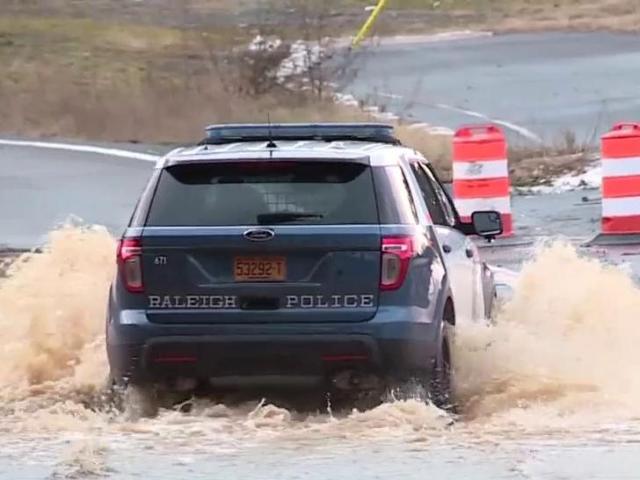 RALEIGH, NC — One of Raleigh’s busiest intersections has been flooded and closed due to a major water main break — and could be closed for days.

The road is closed between Blue Ridge Road and Cheney Road as crews work on repairs.

Raleigh Water estimated the shutdown would last until 6 p.m. Thursday, if not longer. The North Carolina Department of Transportation said Western Boulevard will remain closed until 11:36 p.m. Friday. Depending on the severity of the damage, it may be closed for several days.

The force of the water has seriously damaged the asphalt laid a few months ago when the intersection was converted into a diamond interchange. The ongoing construction is facing another hurdle.

All Western Boulevard traffic is being diverted to the I-440 Beltway in both directions. Detours are in place, drivers should seek alternative routes.

Nothing has been reported about the reasons for the water main break.

The North Carolina Department of Transportation said it does not believe the water main break will affect construction or road work in the area.

Raleigh Water issued a boil water advisory for water users near West Boulevard and I-440 on Wednesday. The city said consumers should boil all water for consumption.

According to the city, customers will be notified when the boil water advisory is canceled.

Crews are now digging new pavement to try to contain the leak.

WRAL News has received reports that nearby townhouses are without water due to the break. A Raleigh Water spokesman said it’s a townhouse community near the intersection of Blue Ridge Road and Western Boulevard, along with some homes off Method Road.

WRAL News is working to gather more information. Please refresh the page for the latest information.