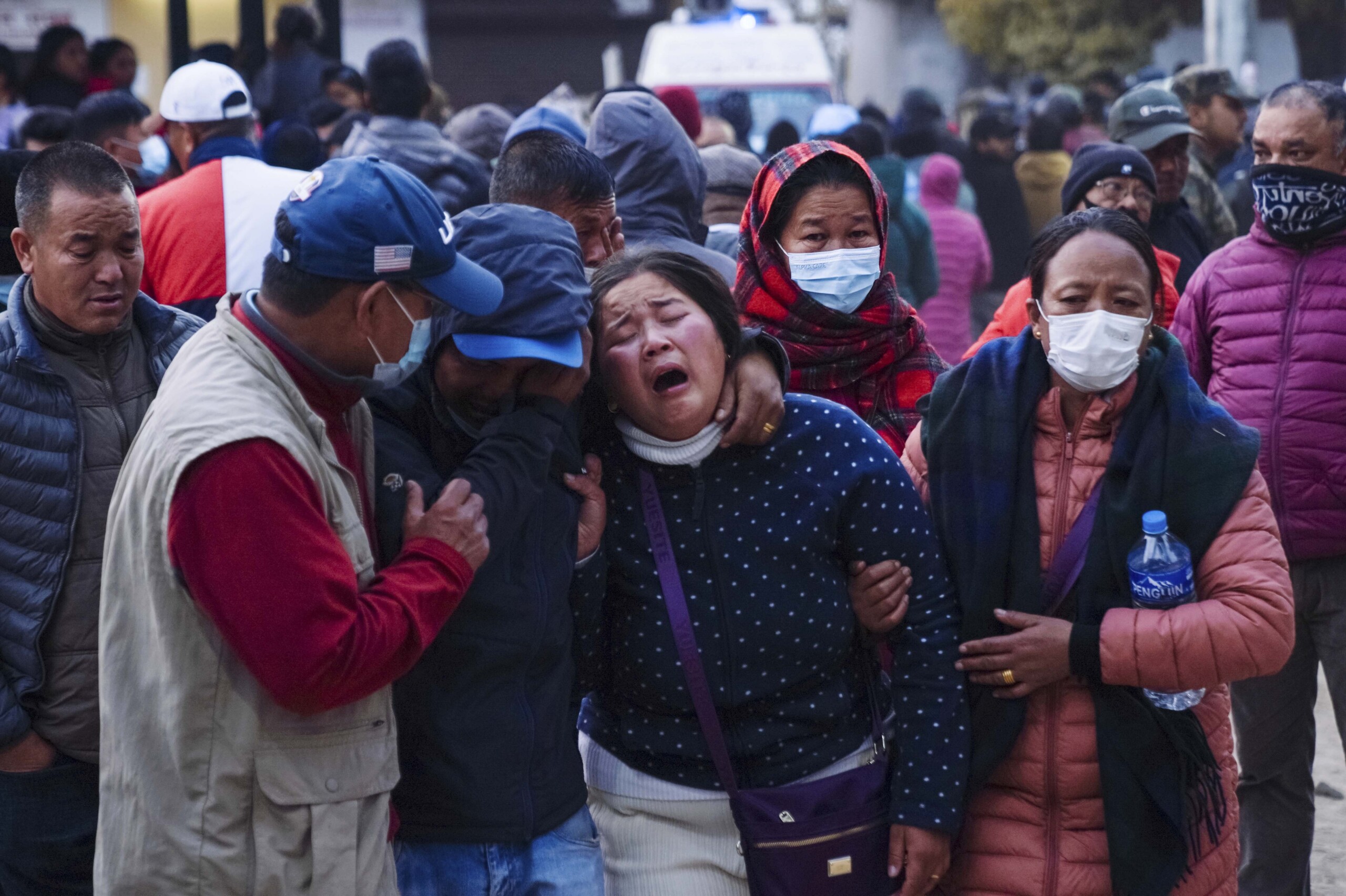 A woman cries as the body of a relative, the victim of a plane crash, is taken to a hospital in Pokhara, Nepal, Sunday, Jan. 15, 2023. The plane, which was making a 27-minute flight to the tourist town of Nepal, crashed Sunday while trying to land at the newly opened airport, killing at least 68 of the 72 people on board. At least one witness reported hearing cries for help from inside the fiery wreckage, the nation’s deadliest plane crash in three decades. (AP Photo/Younish Gurung)

POKHARA, Nepal (AP) — A plane on a 27-minute flight to a Nepalese tourist city plunged into a gorge Sunday while trying to land at a newly opened airport, killing at least 68 of the 72 people on board. At least one witness reported hearing cries for help from inside the fiery wreckage, the nation’s deadliest plane crash in three decades.

Hours after dark, crowds of onlookers crowded around the crash site near the airport in the resort city of Pokhara as rescuers combed the wreckage on the edge of the cliff and in the ravine below. Officials suspended the search for the four missing people overnight and planned to resume the search on Monday.

Local resident Bishnu Tiwari, who rushed to the wreckage site near the Seti River to help search for bodies, said heavy smoke and raging fire were hampering rescue efforts.

“The flames were so intense that we could not get close to the wreckage. I heard the man screaming for help, but due to the flames and smoke, we could not help him,” Tiwari said.

The Civil Aviation Authority of Nepal said what caused the accident.

A witness said he saw the plane spin violently in the air after it started to descend to the ground, watching from the terrace of his house. Finally, Gaurav Gurung said, the plane fell nose-first to the left and fell into a gorge.

Aviation authorities said the plane last contacted the airport in the Seti Gorge area at 10:50 a.m. before crashing.

The twin-engine ATR 72, operated by Nepal’s Yeti Airlines, was flying from the capital Kathmandu to Pokhara, 200 kilometers (125 miles) to the west. There were 68 passengers on board, including 15 foreign nationals, as well as four crew members, the Civil Aviation Authority of Nepal said in a statement. Among the foreigners were five Indians, four Russians, two South Koreans and one each from Ireland, Australia, Argentina and France.

Images and videos posted on Twitter showed plumes of smoke coming from the crash site, about 1.6 kilometers (almost a mile) from Pokhara International Airport. The plane’s fuselage was broken into several pieces that were scattered across the gorge.

Firefighters carried the bodies, some burned beyond recognition, to the hospital, where grief-stricken relatives had gathered. At Kathmandu airport, the family members appeared distraught as they were escorted away and sometimes exchanged heated words with officials as they waited for information.

Prime Minister Pushpa Kamal Dahal, who arrived at Kathmandu’s Tribhuvan International Airport after the crash, set up a team to investigate the accident.

“The incident was tragic. The full strength of the Nepalese army and police was deployed for the rescue,” he said.

South Korea’s foreign ministry said in a statement that it was still trying to confirm the fate of the two South Korean passengers and sent officials to the scene. Russian Ambassador to Nepal Aleksei Novikov confirmed the death of four Russian citizens who were on board the plane.

Pokhara is the gateway to the Annapurna Circuit, a popular hiking trail in the Himalayas. The city’s new international airport started operating only two weeks ago.

This type of aircraft, the ATR 72, was used by airlines around the world for short regional flights. Introduced in the late 1980s by a French-Italian partnership, this aircraft model has suffered several fatal crashes over the years.

In July 2014, a TransAsia ATR 72-500 crashed while attempting to land in the scenic Penghu Archipelago between Taiwan and China, killing 48 people. An ATR 72-600 of the same Taiwanese airline crashed shortly after takeoff in Taipei in February 2015 after one of its engines failed and the other was shut down, apparently by mistake.

The 2015 crash, captured on dramatic video footage of the out-of-control plane slamming into a taxi, killed 43 people and forced authorities to temporarily ground all Taiwan-registered ATR 72s. TransAsia suspended all flights in 2016, and then stopped working.

ATR identified the plane involved in Sunday’s crash as an ATR 72-500 in a tweet. According to the plane’s tracking data from flightradar24.com, the plane was 15 years old and “equipped with an old transponder with unreliable data.” According to records on Airfleets.net, it was previously flown by India’s Kingfisher Airlines and Thailand’s Nok Air before Yeti took over in 2019.

Home to eight of the world’s 14 highest mountains, including Mount Everest, Nepal has a history of plane crashes. According to the Flight Safety Foundation’s aviation safety database, there have been 42 fatal plane crashes in Nepal since 1946.

Sunday’s crash was the deadliest in Nepal since 1992, when all 167 people on board a Pakistan International Airlines plane crashed into a hill while trying to land in Kathmandu.

The European Union has banned airlines from Nepal from flying to the bloc’s 27 countries since 2013, citing lax safety standards. In 2017, the International Civil Aviation Organization noted improvements in Nepal’s aviation sector, but the EU continues to demand administrative reforms.