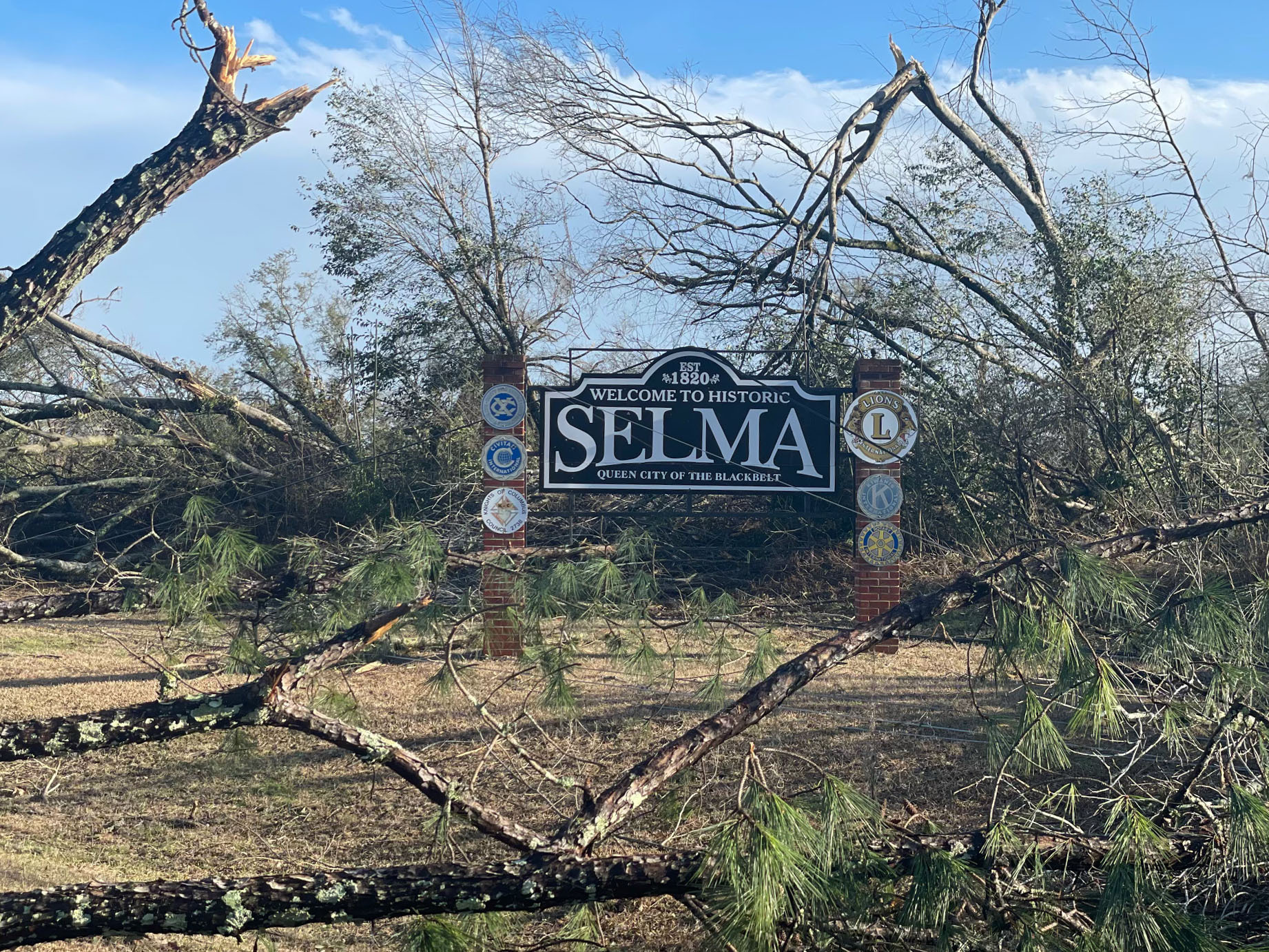 SELMA, Ala. (AP) — A giant swirling storm system moving across the South spawned a tornado Thursday that tore through walls, ripped roofs and uprooted trees in Selma, Alabama, a city that made history in the civil rights movement.

In Autauga County, Alabama, which is 41 miles (66 kilometers) northeast of Selma, officials estimated 40 to 50 homes were damaged or destroyed by the storms that crossed the county, said Ernie Baggett, the county’s director of emergency management. situations. He said crews were focused Thursday night on sawing through downed trees to look for people who may have been injured.

“Search and rescue is really more of what’s going on right now,” Baggett said by phone.

Autauga County Sheriff David Hill says 6 of the deaths occurred in the Old Kingston area, which is in the northern part of the county.

In Selma, brick buildings collapsed, cars were on their sides, and utility poles were strewn across downtown. Columns of thick black smoke rose above the city from the fire. It is not yet known whether the storm was the cause of the fire.

A few blocks from the city’s famous Edmund Pettus Bridge, an enduring symbol of the suffrage movement, buildings were crumpled by the storm and trees blocked roadways.

Selma Mayor James Perkins said first responders were continuing to assess the damage and the city was under a curfew.

A “large and extremely dangerous tornado” caused damage as it moved through the historic city, the National Weather Service said. There were confirmed reports of damage to trees and structures in Selma and reports of damage in other counties, the agency said.

Across the country on Thursday, the National Weather Service issued 33 separate tornado reports, with several tornado warnings still in effect for Georgia, South Carolina and North Carolina. However, the reports are yet to be confirmed and some may later be classified as wind damage following an assessment made in the coming days.

Former state Sen. Hank Sanders said there was damage “all over Selma” in Alabama.

“The tornado definitely damaged Selma. It actually hit our house, but not in the forehead. Windows in the bedroom and in the living room flew out. It’s raining through the roof in the kitchen,” Sanders said.

Selma, a city of about 18,000 residents, is located approximately 50 miles (80 kilometers) west of the Alabama capital city of Montgomery.

Selma was the flashpoint of the civil rights movement. Black suffragists were brutally attacked by Alabama police as they marched across the Edmund Pettus Bridge on March 7, 1965. Among those beaten by law enforcement officers was John Lewis, who suffered a fractured skull. He had a long and distinguished career as a US Congressman.

After the tornado passed, Chrishun Moore came out of her house to the sound of children crying and screaming. She and her mother urged the children to keep screaming until they found the two of them on the roof of the destroyed apartment. According to her estimates, the children were about one and four years old. Both are fine, she said on Facebook.

Malesha McVeigh and her family were driving parallel to the tornado. She said he was less than a mile from her house before suddenly turning around.

“We stopped and prayed. We followed it and prayed,” she said. “It was 100% God’s thing that he turned around right before he hit my house.”

She captured a video of the giant twister blackening as it smashed into house after house.

“He would get into the house and black smoke would go up,” she said. “It was very terrifying.”

The weather service declared a tornado emergency for several counties north of the capital, Montgomery, as the same storm system moved east. “This is a life-threatening situation. Take shelter immediately,” the weather service said of the tornado.

Several tornado warnings were issued for Alabama, Mississippi and Tennessee on Thursday as the storm system moved through the region.

More than 50,000 customers were without power in Alabama, according to PowerOutage.us, which tracks outages nationwide.

In Georgia, more than 100,000 customers were without power just before sunset Thursday as a storm system made its way through a number of counties south of Atlanta, PowerOutage.us reported.

The storm hit Griffin, south of Atlanta, with winds damaging the shopping district, local news reports said. A Hobby Lobby store partially lost its roof and at least one car was overturned in the parking lot of a nearby Walmart.

Damage was also reported west of downtown Atlanta in Douglas and Cobb counties, with the Cobb County government releasing a damage report showing a collapsed cinder block wall at a warehouse in the suburb of Austell.

In Kentucky, the National Weather Service in Louisville confirmed an EF-1 tornado touched down in Mercer County and said crews were surveying several other counties. There were reports of downed trees, power outages and other scattered damage as the storm swept across the state.