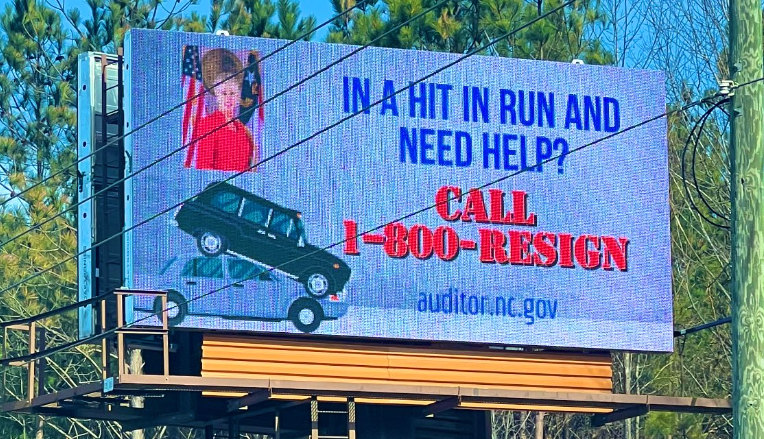 This comes as Wood, the state auditor since 2009 several charges have been filed after he left the scene of the December crash, which included a hit-and-run, Wake County Prosecutor Lorin Freeman confirmed to CBS 17 Wednesday night.

She faces a Class 2 misdemeanor charge of hit-and-run resulting in property damage and a dangerous driving violation, Freeman said.

As of Saturday, people reported seeing the billboard at the corner of US-1 and NC-96.

It reads: “Had a collision and need help? Call 1-800-ORDER” and there is a link to North Carolina Auditor’s Website.

The billboard also features a photo of Beth Wood and a cartoon image of a car on top of another car.

It is unclear who is funding the billboard or when it was put up.

According to court documents, Wood hit a parked 2016 Toyota Sedan in downtown Raleigh around 9:12 p.m. on Thursday, Dec. 8.

Documents said she veered off the right-of-way at South Salisbury Street and West Hargett Street while driving a 2021 Toyota Sedan and crashed into the vehicle.

Andrea Cordella, witnesswas leaving work the night of the accident and described how serious it looked.

“The police were already there when I saw it. I just saw a parked car that was hit and then the hit car was on the hood of another car. The engine was still running, the headlights were on. He was just left there,” she said.

According to court documents, Wood was charged on Dec. 12.

A spokeswoman for Wood, who is in her fourth term as auditor, said Thursday she would not comment on the matter. CBS 17 reached out to Wood’s attorney but did not hear back.

District Attorney Freeman declined to elaborate on the incident.

Wood’s trial is set for January 26.