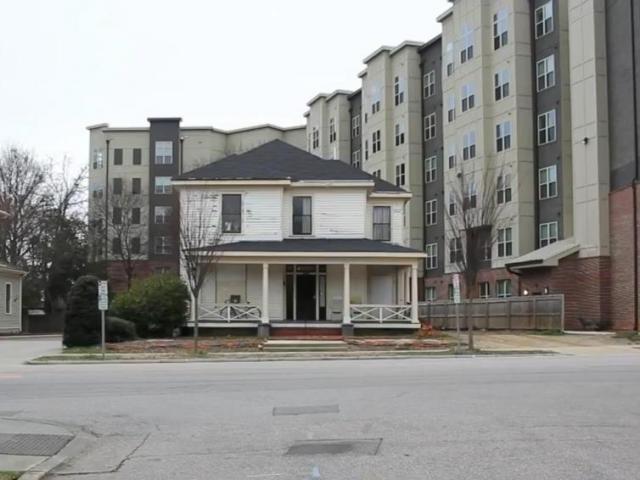 RALEIGH, NC — A real estate entrepreneur plans to replace a century-old house in Raleigh with 100 apartments, each about the size of a shipping container.

The property sits right along Hillsborough Street between downtown and the NC State campus – on less than a quarter acre of land.

Lately, the historic house has been overshadowed by recent development next door.

David Smoot, who owns the house, wants to replace the house with a 5-story building full of micro-apartments, each about 160 square feet.

To give you an idea of ​​how much space each micro-apartment will have: PNC Arena parking spaces are about 144 square feet. The area of ​​a bus stop in NC State is about 120 square feet.

What would it be like to live in such a small apartment?

“It’s beautifully located in the heart of the city, where anyone would want to live,” says Smoot. “They will be precisely designed so that people starting their careers can have their own place.”

“I think it’s too small, it’s inhumane to live in such a small space,” says Annabelle Langford, a student at NC State.

However, with the shortage of housing — especially affordable housing — in Raleigh, some people believe it’s a step in the right direction.

Cameron Brown, another student, said: “If it provides decent housing for people who are in need, then I have no problem with it.”

Currently, there are plans to rent micro-apartments for $1,000 a month or a little less.

“It’s the cost, not the size of the room, that makes the difference,” he says.

At $6.25 per square foot in a part of town where apartments are expensive, the cost is more affordable than most downtown housing.

“You’re probably looking at $7.50 or $8.00 a square foot, so when you do that kind of comparison, it really looks like a good value,” says Dustin Engelken of the Triangle Apartment Association, which says demand is growing for smaller areas at lower prices.

WRAL News searched for apartments nearby, and the cheapest we found was a 600-square-foot studio for nearly $1,500 a month.

Smoot hopes to begin construction on his project in the summer.

As Raleigh rapidly grows and evolves, here are 8 iconic places Raleigh is losing

From the state’s first Char-Grill to the classic Rialto Theater and the historic 1930s Art Deco building that housed Charlie Goodnight’s restaurant, learn about what the city is losing and what it’s gaining in return. WRAL’s Amanda Lamb and Hidden History reporter Heather Leia share memories of local cultural hotspots that changed forever in just one year.