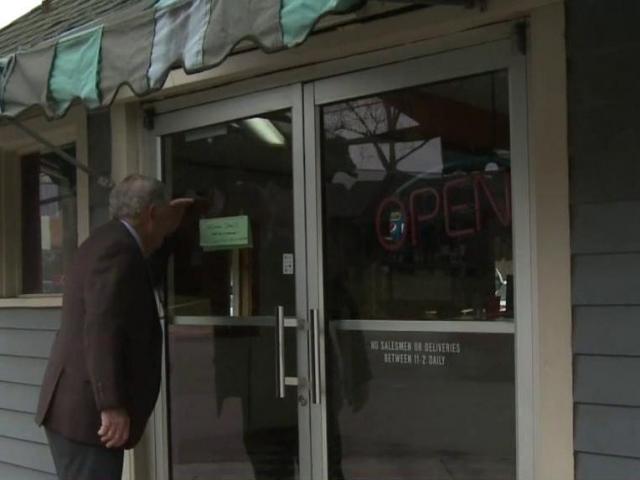 Its roots go back more than 100 years in the historic black community.

So these days it’s not uncommon to see people stopping to look through the glass doors to see what’s left. That’s why Mickey Phillips stopped by.

“You won’t find such places anymore. I guess there’s a lot of new businesses coming into town, but you don’t want to lose businesses like this, which I think are very valuable,” Phillips said.

He added: “I’m telling you, I just hate to see history ignored or destroyed.”

Last November, it was announced on Facebook that the previous owner and operator, Crystal Bish, was closing up shop. Locals say it has been operating under many owners for over 100 years.

Now, the future of the corner deli, with its weathered siding and torn awning, remains uncertain.

Mabel Patterson, 85, lives just a few driveways from a deli that holds memories to last a lifetime. She said, “I guess in your old age you keep the memories you had when you were a little girl.”

Patterson has seen many landmarks in this historically black neighborhood disappear. Buildings like the Graves Field House and the Turner House are now part of the city’s plan to preserve and protect what remains.

Patterson hopes this old Community Deli will survive in some form. “Try to put it in a place where it can be used as a museum,” she said, or as an office or gift shop. However, she knows that it was built to feed the community.

She remembers the menu. She said, “Wednesdays we had hot dog day, hot dogs for dollars. Mondays we had a cheeseburger special. Tuesdays were BLTs.”

Philps just knew the food was worth the return. “And they made a chicken batter that was better than any I’ve had except my mother’s,” he said.

Others may say some changes are good, but you won’t convince Mabel Patterson, not when it comes to this attraction. “Changes don’t necessarily work for me all the time, and with that being where they are.” She continued, “Even if you want to replace it, try to replace it with something that represents what was already here.”

Although the small structure is believed to have been in business for over 100 years, the oldest listing is in the 1930 Old Raleigh City Directory as “Ligon and Grant Soda Store.”