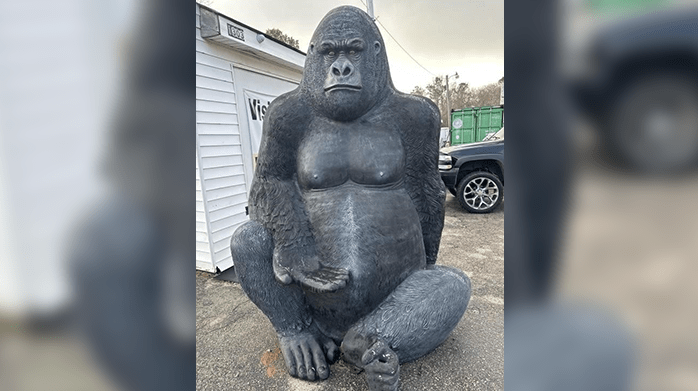 WAKE FOREST, NC (WNCN) — A giant gorilla sitting near South Main St. at Wake Forest, is getting a new home.

The 8ft tall, 5ft wide gorilla is currently standing outside Hoy Auction in the city, holding out its hand for people to sit on for photos.

Business put the gorilla up for auction. That’s right – Mahila gorilla was for sale.

This created a moving in the communitywith Facebook messages and requests to leave the gorilla in the city.

It also raised many questions – where did the gorilla come from? How long was he at Wake Forest? Why was it put up for auction?

CBS 17 spoke with Jay Hoyowner of Hoy Auction, to get answers.

PREVIOUS: Why is Wake Forest’s ‘local landmark’ 8-foot gorilla up for auction?

The auction closed at 10 a.m. Sunday morning, and the locally famous primate began preparing for a new home.

By the time the auction closed, 25 bids had been submitted.

Where is the gorilla going?

Community members have expressed interest in where the gorilla will end up next.

According to Jay Hoy, who now owns the gorilla, the local celebrity will be staying in town.

“I am thrilled to announce that the gorilla will be staying at Wake Forest!” – he wrote in his Facebook post.

He announced that the gorilla’s new home would be in Keith’s shoplocated at 13041 Keith Store Road in Wake Forest.

It is known as a community hangout with a rich history of 80 years.

“It’s an easy decision to make to preserve another piece of Wake Forest history,” the owners of Keith’s Store told CBS 17.

How much did whoever paid for the 8-foot gorilla “local landmark” in Wake Forest pay?

Source link How much did whoever paid for the 8-foot gorilla “local landmark” in Wake Forest pay?