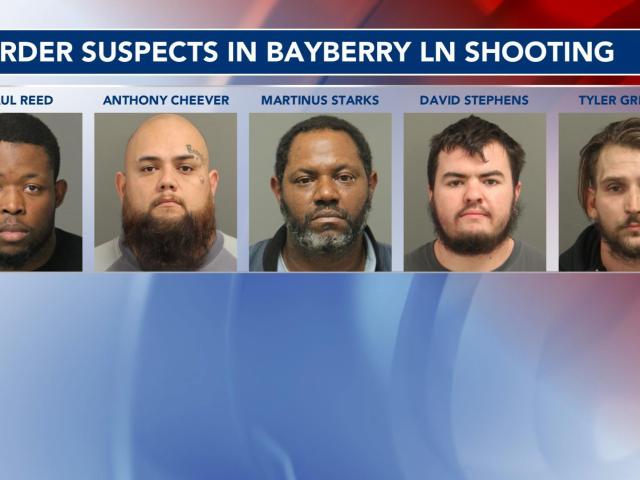 RALEIGH, NC – On Friday, five accused of murder in the New Year’s shooting of a 37-year-old man appeared before the court.

All men face the death penalty or life in prison without the possibility of parole.

Because of the safety risks and to keep the men separated, Grissom and Stevens appeared in court Friday morning and were appointed death penalty attorneys. They will remain in jail without bond.

Grissom asked to hire his own attorney Friday morning. His next trial is scheduled for January 24.

A judge appointed Stevens a capital defender. His trial is scheduled for January 25.

Reed, Starks and Cheever appeared in court at 2 p.m. The judge appointed a defense attorney for each of them.

The warrants also say each man is accused of stealing a $200 jacket, using a gun to shoot Padilla and conspiring “with four other defendants to commit the felony of robbery with a dangerous weapon.”

Neighbors tell WRAL News they heard gunshots after a motorcycle crash around 5 p.m. Jan. 1 on Bayberry Lane near Fawndale Drive. The Valley Estates area is west of Lead Mine Road.

Sources told WRAL News that Padilla was the victim. Padilla lived nearby, according to multiple neighbors and friends WRAL News spoke with Thursday.

Sources confirmed to WRAL News that rival biker gangs are involved in the investigation into Padilla’s death. A source tells WRAL News that Padilla was part of the Pagan Biker gang.

A rock inscribed with the words “I love you dad” stands near a small memorial off Baybury Lane in the Valley Estates area. There’s also a freshly painted sign that says “Lefty” and the letters… “GFPD.”

Many of those arrested show the Red Devils biker gang on their motorcycle vests in photos posted on their Facebook pages.

Many neighbors in the community said they heard five or six gunshots and motorbikes leaving on Sunday.

Sources also told WRAL News that the death is believed to be the result of a motorcycle gang rivalry.

Neighbors said Raleigh police were on the scene for more than 12 hours after the incident, gathering evidence and video of the doorbell.

The five suspects will make their first court appearance on Friday.

The 911 call from the incident explains how the incident unfolded: “I’m at the Cleveland draft house, there’s a bunch of bikers and they’re shooting guns. I need the police now.”

The Red Devils were also involved in a 2022 shooting in Fayetteville that left six people shot and three killed on Owen Drive.

Police said the Red Devils were involved, along with the Hells Angels, Infamous Riders and La Familia.

So far, police have not publicly linked the shooting to clashes between rival biker gangs, nor have they established any connection to other shootings or fights.

“Thanks to the diligent efforts of our investigators and the assistance of our federal, state and local law enforcement partners, the Raleigh Police Department apprehended and removed five dangerous criminals from the streets of our city,” Patterson said. “I am grateful for the collaborative efforts of law enforcement agencies across our state’s various jurisdictions to identify and arrest these suspected offenders quickly and without incident. RPD will continue to pursue offenders who terrorize and harm our communities with callous and ruthless violence.”