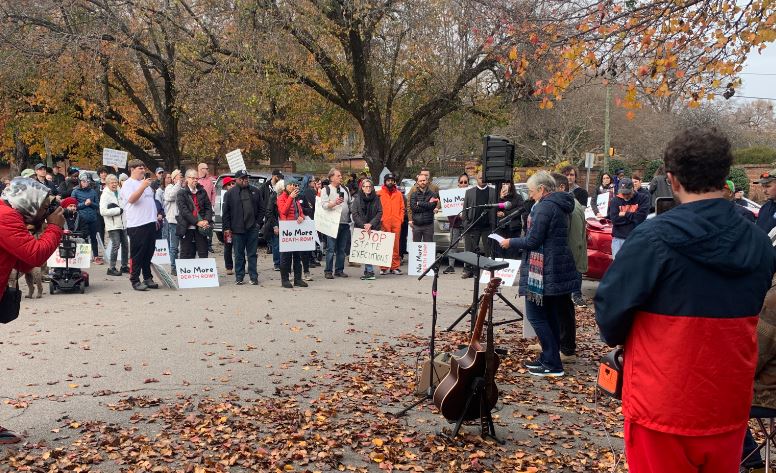 RALEIGH, NC (WNCN) — A protest march Saturday in Raleigh called for an end to the death penalty.

More than 100 people from the NC Coalition for Alternatives to the Death Penalty took to the streets to demand action from Governor Roy Cooper.

They marched from North Carolina Central Prison to the executive mansion, calling on the state’s governor to commute the death sentences of 135 people.

“After the death penalty, there’s nothing you can do to commute the sentence,” said Tim Bliss, who participated in the march.

The leaders of the charge were those who had lost loved ones in the murder.

“Violence is violence. My family went through this and I hate to see it continue with the death penalty,” Jean Parks said.

Although the state hasn’t carried out an execution since 2006, organizers say North Carolina has the fifth-most populous death row in the country.

Jamie Lau is Associate Director of the Center for Criminal Justice and Professional Responsibility at Duke Law School.

He says too many people in North Carolina have been wrongfully sentenced to death.

“I had clients. I know families of people who have been wrongly sentenced to death, and North Carolina should not be putting people on death row when we have a system that is wrong,” Lau said.

Instead, he and others want to see solutions.

“I would like the governor to remove all persons from death row, to reduce their sentences. Commuting doesn’t mean people will go free, but at least it won’t be irreversible, they won’t be put to death, so those who are actually innocent and didn’t commit a crime, when our system could have made a mistake, can be sentenced and corrected , – said Lau.

Organizers say that of the 135 people currently on death row, all but a handful were convicted more than two decades ago.