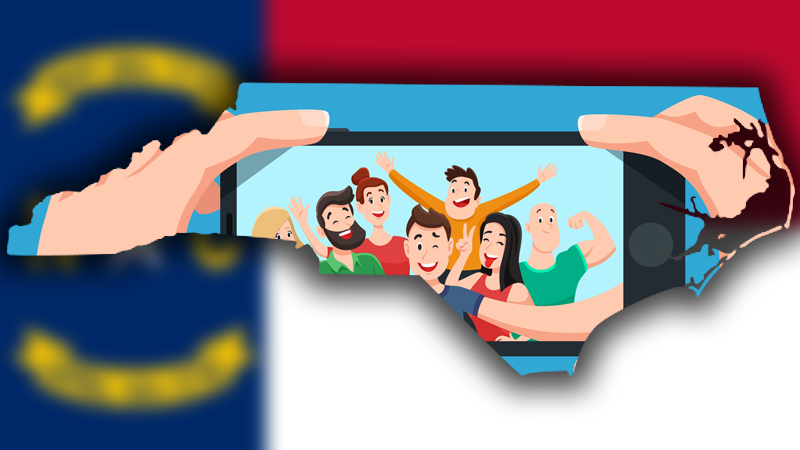 GREENSBORO, NC (WGHP) – Ready, pose, smile, click, discard, repeat: Your last selfie is now in much sharper focus, and you’re taking a lot of them. Obviously, we now see that this is a reflection of our self-images.

In fact, a new survey shows North Carolinians take 1.87 selfies per week (roughly one every three days), which is 25% higher than the national average of 1.5 and ranks ninth among all states surveyed .

John Hardister is making it official: He wants his face in North Carolina elevators

It was survey of 2,302 people conducted by North Star Inbound experts for Shine Smile Veneers, a cosmetic dental appliance. Data excludes Alaska, Delaware, Idaho, Montana, North and South Dakota, Vermont, and Wyoming due to insufficient response rates. We don’t know anything else about the methodology.

Otherwise, the facts are clear: women take about 50% more selfies than men, except for older people, with Gen Z women taking the most (4.08 per week on average).

The study also found that selfies are most often taken in front of a mirror in the bathroom (72%) or in the car (71%), which likely involves a different type of mirror. “Locker room” was No. 4 (31%). Yes, we must stop to think about mirrors.

But the survey shows this: 35% of respondents – a number that sounds suspicious to us – “say they edit selfies with unflattering aspects of their appearance.”

Think about it. If you’ve pointed the camera at your face – or some part of yourself – and taken a picture, you might wonder if that percentage might be right.

Who wouldn’t edit out the unflattering? After all, half of us used filters in the process. (Curry Lake Page.)

But in North Carolina, we are sometimes even more aggressive. More than 1 in 10 of us (11%) admit to taking selfies at our gyms (13th in the nation) – Georgia and Texas (24%) were the gym leaders – and 5% admit we posted (we assume on social media) pictures of our bottoms.

Believe it or not, there were nine states where respondents said they showed rear ends more often than we did in North Carolina. You can edit this sentence as you see fit.

The national average for “belfies,” as they are coined, is 9%. Our friends in South Carolina, Alabama and New York (17%) had the most butt shots. Arizona, Arkansas and Michigan (15%) also turned up more cheeks.

But here’s our next suspect number: Only about 1 in 10 people say they’ve “regretted taking a selfie.”

We’re just glad the survey didn’t include more body parts. What we would regret.