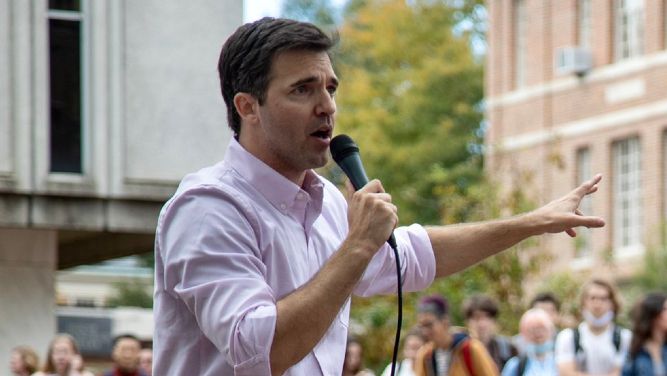 CHARLOTTE, NC – Daily tasks for seasoned lawmakers on Capitol Hill that may seem mundane have garnered millions of views on the popular social media app TikTok.

US Congressman Jeff Jacksonwho represents parts of Mecklenburg and Gaston counties in the House of Representatives, has engaged ordinary citizens with his behind-the-scenes look at what it’s like to be elected to Congress.

“I found that people are really not interested in hearing from a political party. They prefer to hear from the person,” said Jackson (D-District 14). – And I use TikTok because I use a lot of different social media channels for that.”

The freshman congressman, who has been a senator from North Carolina for eight years, has video created about the election campaign, the election, how the new officials choose their positions and much more.

Jackson, who also serves as a major in the National Guard, says TikTok is an opportunity to be honest and pull back the curtain on politics.

“I think trust in political leadership has never been lower. And when you’re in that situation, you can’t tell people they’re wrong by not trusting people in elected office. You just have to show them a much higher level of transparency. Transparency is the key to trust, and it’s not difficult,” Jackson said.

“This ban is a good idea. There is a security threat. I’ve read the remarks of our FBI director in which he kind of lays out the security threat, and I think that’s legitimate,” Jackson said.

Jackson says he uses TikTok on a non-public phone where it’s the only app on that device.

On the subject: US House of Representatives, states tighten bans on TikTok on government devices

In one of his TikTok videos, Jackson addressed multiple votes for House Speaker, attracting more than 2.9 million views on that video alone.

Jackson says his most interesting experience in Congress so far has given him pause.

“About 10 days ago, I was talking to someone I had never met before, but I had a very strong suspicion because of their online and television presence. And I was absolutely wrong with this person,” he said.

“They turned out to be great and really committed to their area, really knowledgeable in their area. And it just made me go, “OK, I’m going to hold off on all my assumptions about everyone here until I get a chance to deal with them one-on-one.”