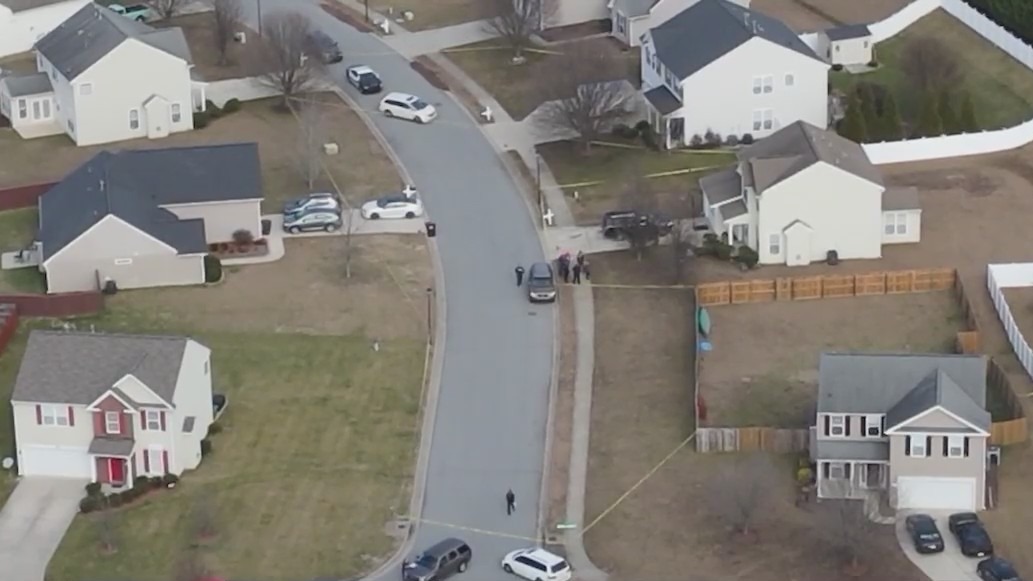 HIGH POINT, NC (WGHP) — Five people were killed over the weekend in a quiet area of ​​North Carolina in what police are treating as a murder-suicide.

Three children and two adults were initially reported to have been killed Saturday morning at a High Point home, but police later clarified that one of the victims was 18, making her an adult.

Neighbors said they woke up Saturday to two men banging on their door and ringing the doorbell for help, saying someone was trying to kill them.

“The man said it was his father. Woke up with a gun in his head. Somehow he pulled the magazine out of the gun and they ran away,” said the neighbor, who refused to give his name.

Police say they were initially called just after 7 a.m. and dispatched to the home where they found three adults and two children dead from gunshot wounds.

The two surviving victims, who fled and sought help from neighbors, were identified only by a family member and an acquaintance, both adults aged 22 and 25.

Police say that around the time the two men were knocking on the door for help, Robert J. Creighton Jr., 45, shot and killed his wife, Athalia A. Creighton, 46; their 18-year-old son Kasim Creighton and two younger children, ages 16 and 10, who have not been identified. Police believe Robert Creighton killed himself.

“We may never know why,” said Lt. Patrick Welch. “What passes through the hearts and minds of the man who would do it sometimes dies with him.”

Police are working to trace the firearm found at the scene and cannot say whether it was obtained legally or not.

High Point police received previous calls to the home as far back as 2014, according to records. Police said two of those were domestic calls, with fights that did not lead to arrests. In January 2022, the police received medical assistance, and then a request for involuntary confinement.

Police confirmed that Robert Creighton suffered from some sort of mental illness, but declined to release that information out of respect for the family and the investigation.

A flow chart provided by the North Carolina Department of Health and Human Services describes the process for issuing a foreclosure order.

“I’ve been in law enforcement for a little over 18 years and I’ve never seen anything of this magnitude in the city of High Point,” said Police Capt. Matt Truitt.

Welch says they shared some information with Guilford County Schools to allocate needed resources to the students, and the school district confirmed Kasim Creighton was a student at Ragsdale.

It is with deep regret that we inform you of the recent loss to our school community of an 18-year-old and a 16-year-old who attended Ragsdale High School, as well as a 10-year-old student who attended Union Hill Elementary. We are heartbroken and our thoughts are with the family. District crisis teams will be at both schools throughout the week, and the district is ready to help the family in any way they need.

Details about the scene have not been released, and Welch said the surviving victims have extended family supporting them.

Mass family murders are not uncommon in the United States. An Associated Press-Northeastern University database shows that about every three and a half weeks there has been a mass murder in the family for the past two decades.

Last May, Davie County is rocked by a murder-suicide that took the lives of an infant, a toddler and their mother. just last week five children were among eight killed in a murder-suicide in Utah after the man’s wife tried to divorce him.

Experts from Northeastern University say that mass murders in families make up 45% of the 415 mass shootings since 2006.

There is no government agency nationally that tracks murders and suicides, so a few years ago policy analysts at the Violence Policy Center—a non-profit education organization that conducts research and education on violence in the U.S.—began tracking details from the news to create an annual the report The latest version from 2020 looked at murders and suicides, including many mass killings in the first six months of 2019.

The study found that 81% of murder-suicides occurred at home, and 65% involved intimate partners. The study also found that among murder-suicides in which more than three people were killed in addition to the attacker, six out of 10 in those six months were incidents in which a person killed their children, a partner and themselves.

If you are in a crisis, you can call National Suicide Prevention Lifeline anytime by calling 988 or 1-800-273-TALK.

‘We may never know why’: Family of 5 dead in N.C. murder-suicide, police say

Source link ‘We may never know why’: Family of 5 dead in N.C. murder-suicide, police say