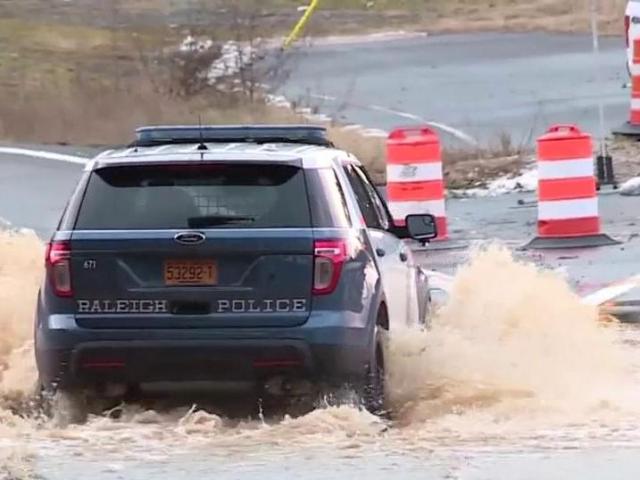 RALEIGH, NC — One of Raleigh’s busiest intersections has been flooded and closed due to a major water main break, and the road won’t reopen until next week.

Raleigh Water announced that repairs along Western Boulevard near Interstate 440 will end at 10 p.m. Friday, but traffic will not resume until Wednesday. The city initially said the road would reopen on Monday.

However, the city also noted that construction schedules may change.

The road is closed between Blue Ridge Road and Cheney Road as crews work on repairs.

“Any time it rains or you have unusual temperature swings, it can disrupt the paving process,” said Ed Buchan of Raleigh Water. “Originally we were hoping to have it done on Monday morning, now we’re putting it off until Wednesday.”

All traffic on Western Boulevard is being diverted to the I-440 Beltline in both directions. Detours are in place, drivers should seek alternative routes.

This media cannot be viewed at this time.

Nothing has been reported about the reasons for the water main break.

The North Carolina Department of Transportation said it does not believe the water main break will affect construction or road work in the area.

Some people living in the area told WRAL News they lost water after the outage. As of Thursday afternoon, all but a few customers had service restored.

Jack Susman lives nearby and told WRAL that his water was restored at 2 a.m. Thursday. He said it was frustrating to have to go through all the construction at the new intersection, and the burst water main made things even more difficult.

City leaders have also heard reports of low pressure in some nearby areas, likely related to debris from the rupture obstructing water meter screens.

Crews are digging new pavement to try to contain the leak.

WRAL News has received reports that nearby townhouses are without water due to the break. A Raleigh Water spokesman said it’s a townhouse community near the intersection of Blue Ridge Road and Western Boulevard, along with some homes off Method Road.

There is no exact estimate of how much it will cost taxpayers in the city of Raleigh.

The last break on this scale, on Glenwood Avenue near Crabtree Mall, just over two years ago, had a final bill of about $1 million. Raleigh Water estimates that we may be in this problem as well.