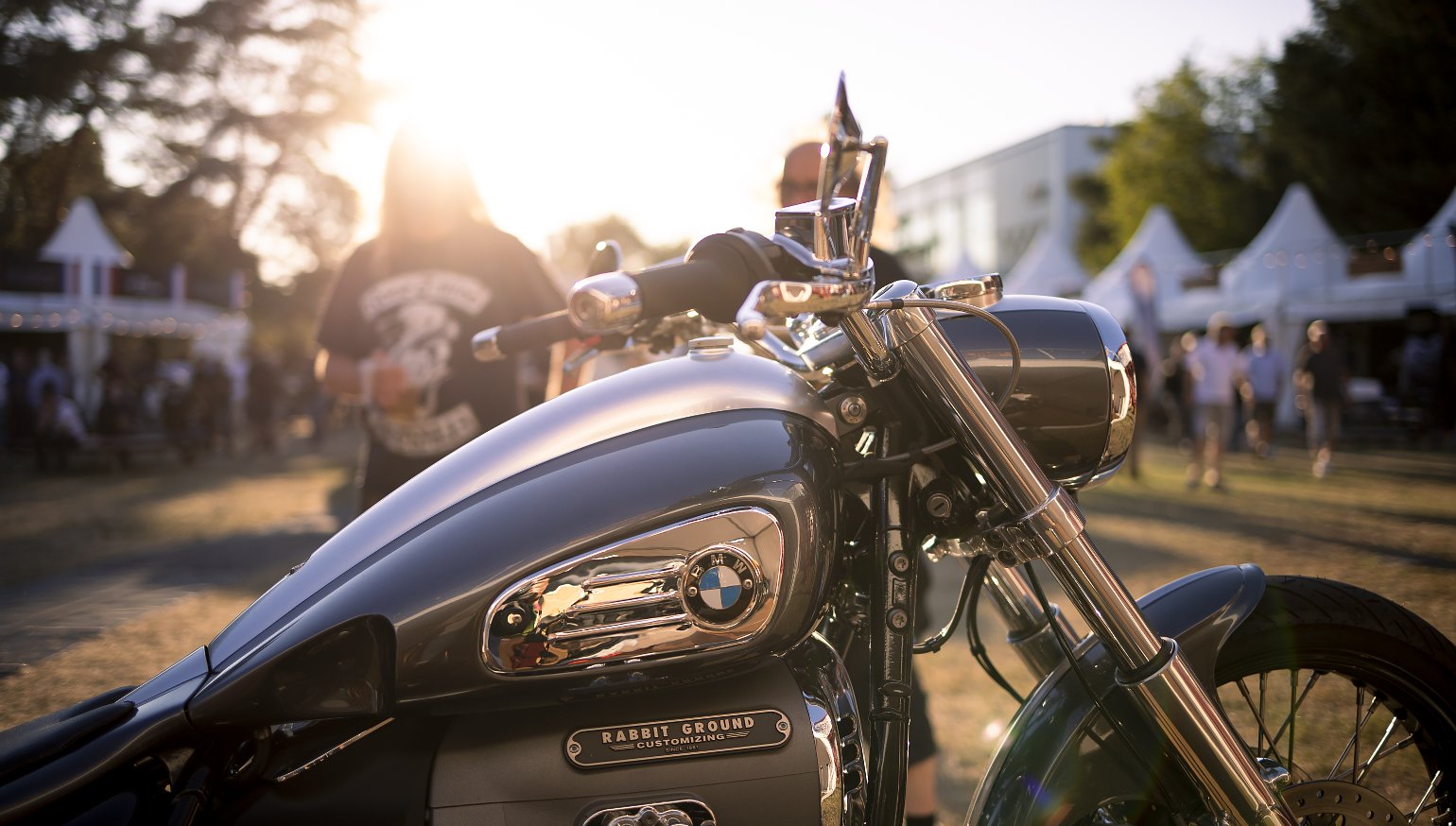 Exhausted, I lean in the southern shade of a nearby tree, drink some pilsner from a plastic cup, and realize that I haven’t seen a motorcycle in two days, except for a BMW. I tell you, this job is not always easy, but someone has to do it.

I’m in the undisputed mecca for Beemer enthusiasts, the massive annual festival called BMW Motorrad Days. Canceled in 2020 and 2021 due to concerns over the coronavirus, the event has decided to bring the event back in 2022, and two years of pent-up excitement have come together for the first time here in Berlin. The event is usually held south of Munich in Garmisch-Partenkirchen, but in 2022 BMW moved the event to a larger venue called Messe Berlin, near the Spandau plant. (Read about my tour of the BMW factory.)

Having worked in event planning and marketing at a few previous jobs, I can’t imagine the logistics of an event of this magnitude that also includes a dedicated motorcycle/lifestyle oriented Pure & Crafted festival. Even more impressive were the logistics that many people had to deal with in order to participate. Motorrad Days brings together riders from all over the world and many clubs come from their own countries to the event. I cheated by taking a short shuttle ride from the hotel downtown, but one group drove their R 1250 GS from South Korea to get there. (I don’t know exactly which way they went, but I’m sure it wasn’t easy!) I saw a lot of club patches from all over Europe on jackets, hats and t-shirts as people lined up for the Motorrad Days on Saturday morning. Some Germans in the queue in front of me loudly complained that the doors were not open yet – it was 10:02, and “on the website it says that it starts at 10!” Can’t make this up.

Instead of pounding down the doors with the crowd, I headed to the demo ride area to ride the all-new CE 04 electric scooter. ( Read my first mini trip review that cool car.) I applaud BMW for taking up such a large part of the festival with the demo rides. The organizers of the event had virtually every bike in BMW’s current lineup available for test rides, and no such rides were conducted.

I was free to cruise around Berlin and test the CE 04 at my own pace. Well, mostly at my own pace… I had to slow down and take a few detours when I came across a parade of traditional organs, also called organs or monkey organs. Innumerable musical organs were dragged by Berliners in period clothes, all playing at the same time, and toy monkeys or teddy bears appeared in the most inexplicable way. I stopped to see what was going on, thinking I would stay to maybe see the end of the parade, but there were so many of them that eventually I just gave up and left. The whole experience still feels like some sort of hallucination. It turned out that Berlin was hosting an international organ festival that weekend, as well as Motorrad days. Go figure it out.

Back in the Messe Berlin parking lot, BMWs lined up from wheel to wheel as far as the eye could see, in some places spilling out into the street. I couldn’t help but walk around the lot to see what people were riding, even though I should have been, uh, at the event itself with everyone else. The R 1200 GS and R 1250 GS were so common that they got bored even before the end of the first row. Vehicles of note: More R 1200 Cs than I’ve ever seen (sadly no spider-faced CLs), lots of sidecar rigs, a good number of street fighters and a few bikes in front of air tanks proudly showing off their age The most used and abused models are the K100s and K75s, which have more dirt and damage than most GSs! I also spotted at least a dozen CE 04’s. I think the Rockster was the only model I didn’t see.

Inside, the first hall was dedicated to world-class custom BMW motorcycles. The R 18 seemed to be a popular base for the build, probably due to a) it being the newest ICE transmission in BMW’s lineup, b) it being a pretty unique engine to build, and c) BMW encouraging tuning of the R 18 since no production version was available. Custom heavily favored boxers in general, mostly R nineT and airheads.

Remember how there were so many GSs in the parking lot that they stopped being interesting? This effect was only amplified in the aftermarket parts room, which was almost entirely dedicated to finding BMW adventure models. Just about every ADV booth seemed to be doing a brisk business with spinners, luggage, auxiliary lights and touring gear. The queue for SW-Motech stretched all the way to the grounds of the nearby vintage parts stand. I came in thinking that the GS-only festival would attract almost the same number of spectators as the standard Motorrad Days. For many BMW Motorrad riders there is the GS line. Just look at BMW sales last year. The brand sold almost 200,000 motorcycles in 2021, and 60,000 of them were R 1250 GS. Then consider the sales of the F 750 GS, F 850 ​​GS and G 310 GS and you begin to understand what Gelande.

Sport models and cruisers seemed to have the least aftermarket. There were quite a few vendors displaying new parts for the R nineT models such as retro gas tanks, cafe racer tailpieces, titanium exhausts and whole body kits in big boxes. Others had upgrades for Airheads, K bikes and even some antique models. One vintage racing bike in particular caught my eye for its build quality, which surpassed some of the professional customs at the entrance to the show. Someone loves connections!

In another room, dozens of 2023 BMWs were placed on sturdy stands so people could try sitting in different models. The G 310s seem to have been the most popular, especially with kids who just wanted to get on the bike and play with the controls. I watched as a man picked up a very short woman (presumably his wife or significant other) and placed her on the S 1000 XR. She seemed really upset about not being able to come down, and he seemed to think it was the funniest thing that had ever happened.

Other goodies in the room included one of Ernst Henne’s record-breaking speed bikes and a new BMW M3 Touring wagon. I know this is Common Tread, the place where we talk about motorcycles, but this M3 Touring… BMW will sell anyone they can make.

A short walk through the quaint market square led to the festival grounds surrounded by food vendors and other motorcycles. In the center was a large stage where the music started that evening. The Pixies were scheduled to play, but had to bail at the last minute due to contracting the coronavirus. And so it goes. Before the concert began, there were plenty of other sideshows to watch, such as the old school Wall of Death show, a display of historic BMW models and professional stuntmen performing backflips on M4 coupes.

For me, the best part of the festival was meeting other people who love motorcycles, like swapping airhead tuning ideas with a Brit who has an R100/7 like mine. Then there was the hilarious Scottish motorcycling journalist who somehow acquired a huge stack of free beer tokens. Aftermarket lighting supplier with some great ideas for my next motorcycle project. A member of the WorldSBK pit crew is ahead of me in the lunch line. A TV show host on a motorcycle who seemed to know everyone. Two Indian motorcycle journalists who exchanged stories about motorcycles not sold in the United States. I also saw familiar faces: Peter Netsheim from Netsheim Museum in Long Island, his daughter Kate and Vinnie Morello, who wrote one of the funniest articles on Common Tread.

Did I come home with any new parts or an appreciation for my BMW? No, and I think that’s okay. The best part of a festival like this isn’t the music, the demo park, the custom bike show, or the cold beer under a shady tree. It’s hanging out with people who are about as crazy as you are, making friends you’ll probably never see in person again, and experiencing the energy of world-class enthusiasts.

You know who probably had the best time at the BMW Motorrad Days? The ride or death clubs were to use this event as inspiration for a group trip. After serving the last taco from the food truck and selling the last tank bag, riders face a long ride home. While getting there by plane might not be as appealing, Motorrad Days are the last word in BMW events for the brand’s most die-hard fans, and plane tickets are probably worth the money if you’re feeling up to it. Safety, South Korean GS riders!