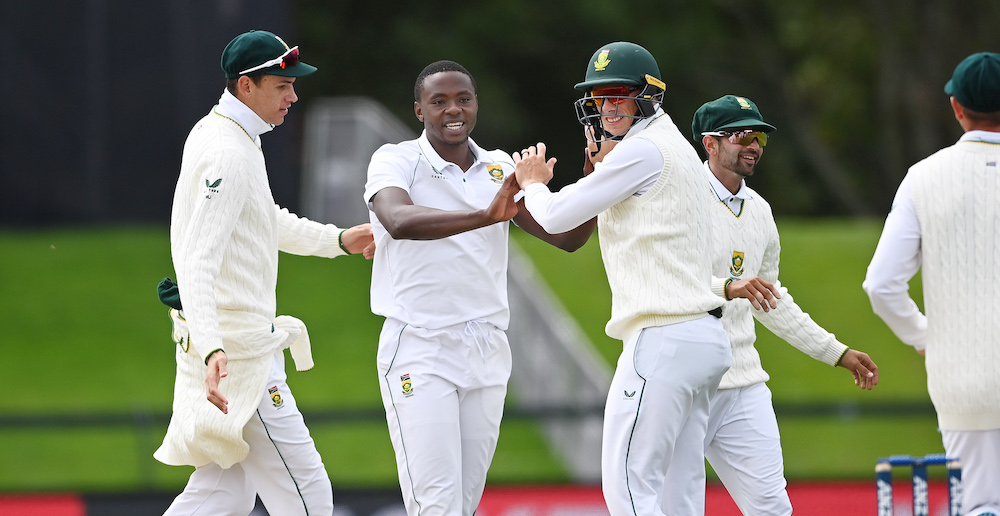 It would say nothing that it was another day off with test cricket at the Hagley Oval.

South Africa’s progress since yesterday has been superbly monitored by New Zealand sailors since the wheels began to come off in the first session. Temba Bavuma and Rossi van der Dussen recovered from where they had stopped. Both batters have remained cautious for most of their partnership, but they have added a total of 58 runs.

The hosts got a much-needed breakthrough when a well-directed yorker Meta Henry hit Bavuma’s body. One wicket brought another when Kyle Werraine humbly moved to the second miss, which gave Henry his third wicket in the serve.

Although it was difficult for him to kill, van der Dussen continued to occupy the fold, but the pressure was real. In his innings 35 of 124 he found the limit exactly once, and trying to get to the other limit cost him a wicket. A full, extensive supply from Neil Wagner prompted a drive he translated to a second slip.

With an open tail the kiwi continued to maintain strict lines. Another deterioration in the concentration of batter Proteas during lunch ensured that New Zealand would easily host the first session. Vian Mulder made a careless shot, and goalkeeper Tom Blandel made the easiest of the catches. South Africa was right on the cliff of the 300th threshold, but they had only three wickets.

Immediately after the break for SA the situation did not improve. The rain caused a short break, but after two overs, Kagis Rabad turned one on cardboard. The 350 seemed quite far away, but the arrival of Keshava Maharaja helped deal a late blow along with Mark Jansen.

Neil Wagner’s short ball tactics may have kept the guards wary, but Jansen and Maharaj took a more stunning and attacking approach. Jansen used his height to his advantage, and Maharaj deployed his priceless aggressive game of striking across the land. The pair added an important 62 runs between them, and it was a partnership that helped bring the Proteas closer to a strong amount in the first serve.

However, there was no fun or games since Kyle Jamison got the last two wickets of Maharaja and Sipamla in the 133rd Aries, which put an end to the SA’s serve at 364.

The hosts starred Matt Henry and Neil Wagner. The relentless spells of both bowlers ensured that the Proteas did not accumulate giant scores in the first half, and constantly supported guessing the midfielders.

The South Africans had more reason to celebrate as Kagisa Rabada drew the first blood in the opening serve of Blackcaps. Skipper Tom Latham tickled the edging down the leg of Kyle Verraine, who was fantastically caught in a jump. Rabada continued to shine as, after three overs, Will Young also hit a half-volley into the goal. Both starters may have fallen victim to fairly innocuous deliveries, but it was these moments that proved to be the coveted confidence boost SA was looking for.

Devon Conway and Henry Nichols managed to deliver NZ to a safe place before the tea break. Conway blunted the attack well from one end, while Nichols pushed his limits to make sure his team didn’t stagnate after two early setbacks. Conway survived several close calls, but his occasional vigil came to a rather modest end as he was the second batter in New Zealand to be stolen in the leg, giving Mark Jansen his first wicket. Three times the hosts were clearly under the pump, facing a difficult task.

Nichols looked very much into the groove, and Daryl Mitchell scored four limits early in his stay. But thankfully for SA, there was another breakthrough just as New Zealand began to consolidate. Jansen finally tricked Nichols into cutting a short and wide serve, but he couldn’t hold it back.

Sarel Hervie added to the game of his dreams a nimble catch in the reverse point, sending back in the form of dough. The impulse continued to sway toward the guests as Tom Blandel ignored the full delivery from Rabada, who turned up late and pulled him off the stump. In five days, NZ faltered and desperately wanted to repair the damage.

Colin de Grand came in at number 7 and from the beginning indicated his intention. He disassembled Viaan Mulder in the 32nd top with six and two fours. And Mitchell proved to be a capable foil for de Grandom by the end of the final session of the day.

Although there was a lot of room to be recaptured, de Grand decided the attack would be a better defense. He raced on the 36th Sword for half a century.

The competition is at an intriguing stage – New Zealand earned less than half of the total SA, but lost half of their gates, but at the same time Colin de Grand looked positive. The focus of visitors will be cleaning the other half of the gates in hand, and it can be a little tricky now that they’re done with the reviews. Get ready for the action tomorrow!