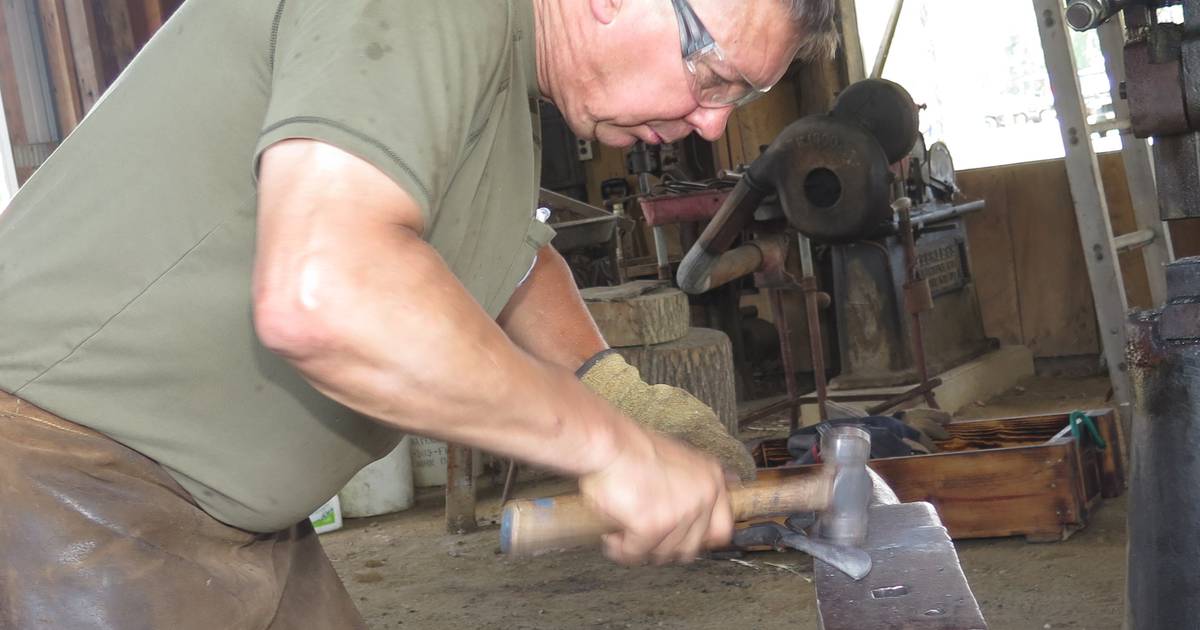 PENFIELD, Ill. — One of the world’s oldest professions, combining science and art, is on permanent display during Historic Farm Days.

The origins of blacksmithing go back to about 1500 BC. e., when the Hittites discovered the process of forging and tempering iron ore in the territory of modern Turkey.

The process of producing wrought iron was developed in the Iron Age by reducing natural iron ore using heat.

This new substance could be used to make simple tools that turned out to be much stronger and sharper than stone, according to the history of the Oldfield Forge.

By the Middle Ages, blacksmithing was considered part of the set of mechanical arts and was a staple of every town, and the blacksmith’s importance to society continued with the colonization of North America and into the Industrial Age.

Larry Lustfeldt and others carry on the age-old tradition of blacksmithing during demonstrations at Historic Farm Days in Penfield, Illinois, each year during the second week of July.

Lustfeldt, from nearby Gifford, has been blacksmithing for 45 years and became interested in it as a youth.

“I was in a group called the Society for Creative Anachronism, a medieval re-enactment group. “I got into it when I was about 13,” he said.

The SCA is an international living history group with the aim of studying and reproducing mainly medieval European cultures and their history up to the 17th century. Activities include renovations.

“We were basically hitting each other with sticks, so I started making armor and it turned into a hot job and a blacksmith part,” Lustfeldt said.

Lustfeld is a member of the Blacksmiths Association of North America, an organization dedicated to preserving the noble art of blacksmithing.

ABANA encourages and promotes the training of blacksmiths; disseminates information on sources of materials and equipment; exposes the art of blacksmithing to the public; and serves as a blacksmith information center for the general public, architects, interior designers and other interested parties.

Lustfeldt is also a member of the Illinois Valley Blacksmiths Association and has been conducting blacksmithing demonstrations at the Penfield Show for 20 years.

Lustfeldt believes it is important to continue the traditions of blacksmithing through demonstrations.

“Blacksmithing has always been such a common thing in society from thousands of years ago to the present day. It’s nice to interest young people and spark their imagination about what it is and what it was, and give them a history lesson about the importance of blacksmithing, especially in its heyday and in ancient cultures,” he said.

“It runs the gamut from people who just poked their heads in to look and then left, to people who stayed here for two or three hours, watching and getting stuff out,” Lustfeldt noted.

“I get a lot of questions, most of them are about the coal and fuel we use, the difference between iron and steel, heat treatment and things like that are probably the most common questions.”