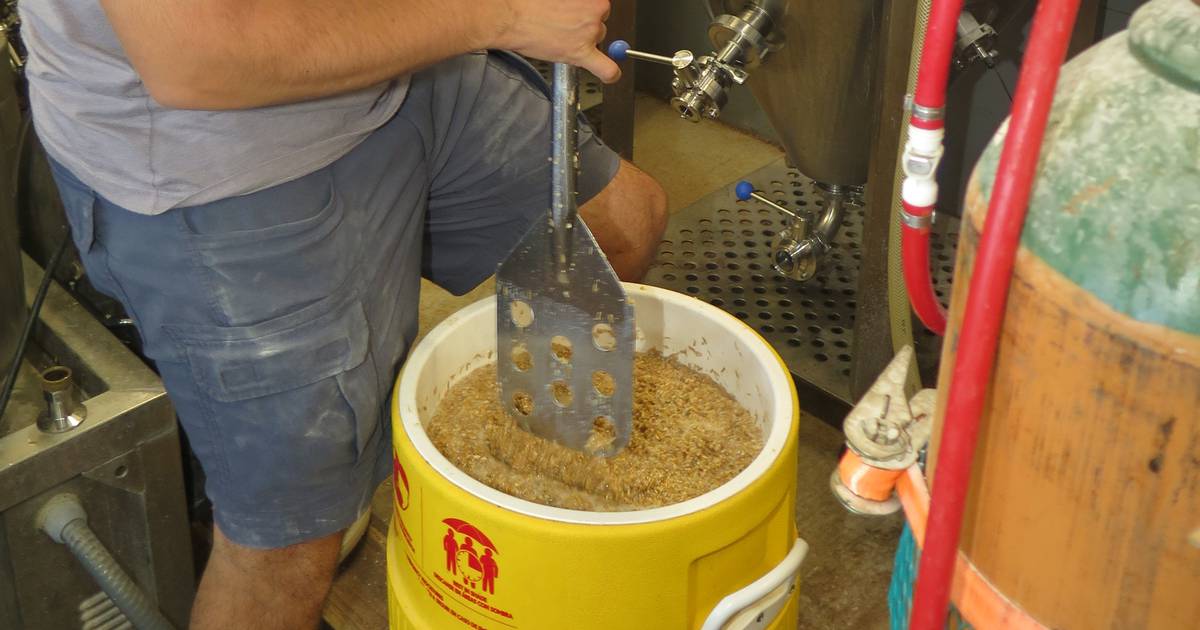 Fairbury, Illinois – Lincoln Slagel enjoys doing research, and when his college roommate introduced him to craft beer, he looked deeper.

These initial experiences led Slagel to eventually open the Emancipation Brewing Company in 2019 on a family farm northeast of Fairbury in a former dairy barn for more than a century.

He and his father Don are co-owners, and Lincoln is the main brewer, producing a wide range of craft beers from local ingredients, including hops grown next to the renovated barn.

AgriNews will be appealing to Slagel every month as part of the very popular From the Fields series. Different farmers and different regions stand out in rotation each week.

It all started with his junior college year. Slagel has just turned 21, and his roommate was a member of a beer club at a local beer shop. Participants each month received selected packages of beer with tasting records.

“It’s not the usual beer experience college students have. He always gave me little samples and I thought they were all very awful. Then I tried what he had that, in my opinion, was completely different. I was very interested in it, so I immediately started doing research, which is my experience, “said Slagel.

“I was really interested in the process, the ingredients, the recipes and everything else from that point of view.”

In November of that year, the Slagels purchased a set for homemade beer, “mostly in order to engage in Thanksgiving morning with father and brother-in-law, rather than interrupting a mom who is actually doing the work,” he said.

Slagel conducted extensive research that led to brewing time. The first batch turned out to be “shockingly good,” he said.

“It was no better than what you buy in the store, but for the first time it was like wow. It was like a fire, ”he explained.

Slagel continued to research the development of beer recipes, history, equipment, and his father, who all his life was a farmer as well as a steel producer, became very interested in equipment.

His business plan involved the use of local ingredients, which is not very common in the Midwest. This coincided with the growing popularity of food movement from farm to fork.

“It’s no longer just being a craft restaurant. You should also look for local ingredients and I thought the beer would probably go the same way. It turned out to be true, ”Slagel said.

The next necessity was the location and unused barn on the family estate.

Originally it was a dairy barn, and Slagel used it for cattle until he was in high school and has since sat empty.

“My budget was not very big, so we invested in brewing the best beer and tried to rebuild the barn ourselves. The feeding trough and a few other elements were removed from the barn, but the original ceiling, floor and doors remained, ”he said.

“We were thinking about pouring new concrete flooring, and the first thing someone praised us at our grand opening was that they like the flooring. My father and I really liked it, because we were worried about it. “

He is unsure of the exact age of the barn, but relatives who lived on the estate in the 1950s and 60s believed the original barn was built around 1920.

In the mid-1940s, the barn was raised, I-beams and concrete floors were erected, and most of the wooden poles were removed. The concrete platform near the barn was added in the 1990s, when it was switched to beef.

“He’s from the Chicago area, and we’ve always joked that he’s a city guy and I’m a country man. He kept joking that we were going to free all the locals from the tasteless beer, and in part because my name is Lincoln, and that kind of affected that. I was not named after Abraham Lincoln. Mom and Dad liked the name, ”Slagel said.

“He started google synonyms for freedom and came up with emancipation. Honestly, at first I didn’t like it, but eventually it stuck. I feel that it has become a suitable name for us. “

About 85% to 90% of the hops used at the brewery this year are accounted for by Land Locked Hops near Lodz. The rest of the hops are grown west of the barn.

“I have always been a fan of using local products. We didn’t just want to use them just because they are local. They are also extremely high quality, and the freshness also affects this, not what we will ship from Europe or the Northwest Pacific. Their presence gave us the opportunity to approach, touch, touch and look at hops, ”Slagel said.

“My dad was a farmer all his life, and he enjoyed testing the new crop, and we also cooked some batches from our hops.”

He also produces grain at the Sugar Creek Malt Company, a small farm near Lebanon, Indiana, where barley, corn, wheat, rye and oats are grown, as well as malt on site.

“Their soils are very similar to here. Nobody grows barley here. I tried to convey it to people and kick them out of the room, ”Slagel said.

“This is a small family farm for several generations, and it has not become easier for small farmers. They were able to add value to their small farm. They do double sowing so they can also grow traditional crops in between, and that also helped.

“They collaborate with Purdue University, Indiana University and the University of Illinois with different varieties of relic seeds to not only have better tastes and more interesting stories, but also minimize soil degradation to preserve land and preserve soil quality for the next generation.

“A local malting company has appeared only in the last five to 10 years. Before that there were three or four large malting companies, and they were the only suppliers. These local people, especially those who grow and malt themselves, as in Sugar Creek, are able to be quite competitive in prices because it is vertically integrated. ”

Among the pleasant parts of brewing you can use almost any grain. Slagel recently brewed beer from blue popcorn made by a local farmer, and took second place in the beer competition.

“This fall we are making beer with several types of corn from Sugar Creek. This is a charity attraction for a children’s hospital. We are preparing the camp for the ban, and it is based on a recipe from the late 1800s, ”he said.

At any time, 10 to 12 different beers are on display, and several more are available in cans or bottles. Slagel brewed 80 unique beers last year and has brewed more than 100 unique beers since the opening of Emancipation in 2019.

Part of the proceeds from the sale of Huey is donated to local school extracurricular programs.

“We recently made our first donation and it went to the men’s and women’s golf teams. I played golf at Prairie Central High School, and we more than doubled their annual budget with just the first donation, ”Slagel said.

Behind the bar there is a sign that reads: “Here you need a hop collector, register here.” Schlagel found the sign in the barn and saved it. The sign was from Slagel’s great-grandfather’s hop farm in Oregon.

“I didn’t even know until we opened. Nobody told me that. My grandmother, my mother’s mother, grew up in the Willamette Valley, Oregon, growing and harvesting hops along with her father and family. The family business was growing hops. I had no idea, ”Slagel said.

The photos near the entrance to Emancipation Brewing show his great-grandfather on one of his hop fields.

“Surprisingly, my grandmother has some handwritten accounting books from the mid-1930s when he grew hops,” he added.