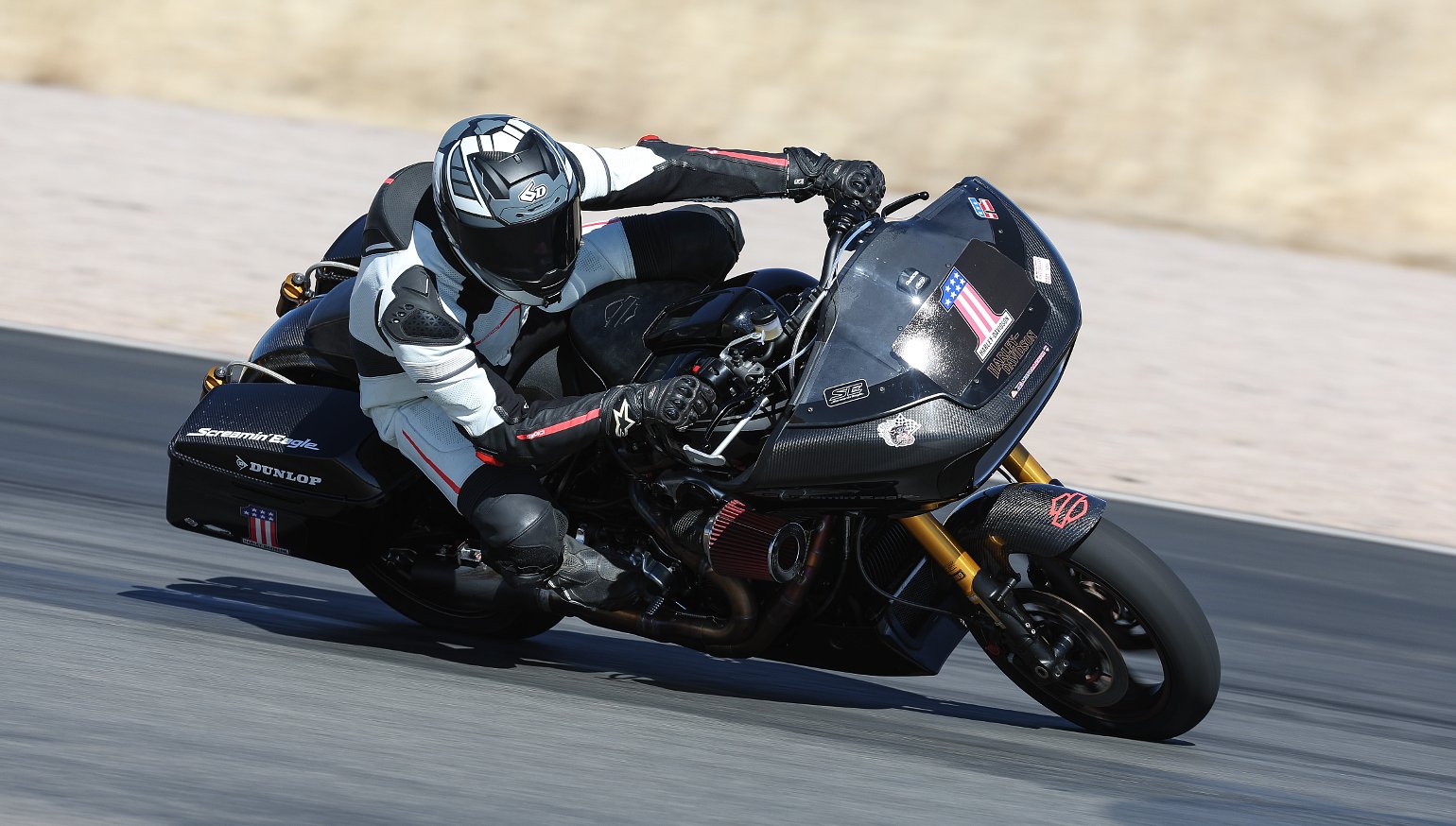 I met a guy recently who said anytime he did something in his life that his mother didn’t like she would simply say, “Hmm, interesting.”


That might sum up your first impression of this motorcycle, a massive and strange-looking Harley-Davidson Road Glide Special race bike equipped with Superbike tires and carbon fiber saddlebags. For the uninitiated, it was forged in the basement of a Milwaukee warehouse by a crew of Harley employees (already with day jobs at the factory) who were keen to take on the MotoAmerica King of the Baggers championship, which became a three-race series in 2021 after a one-off race in 2020. The Motor Company brass then hired MotoAmerica Superbike racer and Daytona 200 winner Kyle Wyman to develop and race the bike. From conception to its hulking state, it is interesting, if nothing else. Even more so the closer you look.


It’s hard to know where to start, but the basic specs will give an idea of just how bizarre and intimidating this machine is in person. The wheelbase is around 64 inches, approximately matching the standard Harley Road Glide that donated its frame for this project. It weighs about 640 pounds. The engine displaces 131 ci — that’s 2,146 cc, or 1,073 cc per cylinder — and the seat is 36.4 inches tall.


It’s huge, in other words, not to mention having all sorts of strangely proportioned parts and angular pieces sticking out here and there. That sky-high seat, for starters, was built by piling layers of foam until Wyman figured it was tall enough to accommodate where the footpegs would need to be. That was its own concern, because where the footpegs needed to be wasn’t near the frame, so the left footpeg mount is welded directly to the engine case. With the rider’s body up and feet back, the fuel tank was way too flat for a racer’s liking. Enter “the pommel,” a 3D-printed block mounted at the back of the gas tank so that Kyle Wyman (and eventually his brother Travis, as well) would have something to grip with their legs while riding in anger. A flat handlebar was bolted to the top of an Öhlins fork to pitch the rider forward and offer more control. Plus, it matches the piggyback Öhlins shocks that suspend the rear wheel and jack up the Road Glide Special’s stern.


As with most factory-built race machines, it’s covered in all sorts of exotic parts and odd little modifications. For example, in the gaping, manta-ray mouth of the fairing, where a typical Road Glide’s headlights sit, there’s a radiator for the engine oil. That’s because an air-cooled engine cranking out more than 150 horsepower and 150 foot-pounds of torque (at the rear wheel) desperately needs airflow, and having the radiator in front of it was a problem.


On the topic of air cooling, at some point in development the team realized that oftentimes the placement of the horn on stock Harley touring models disrupts the air flowing over the engine and helps cool the rear cylinder. A horn is unwanted and illegal in racing, but without it the rearward jug was getting too hot. So they built a scoop, nicknamed the “horn fang,” to direct air to the back cylinder, and supplemented it by extending some of the cooling fins.


Maybe my favorite piece of kit is the swingarm, which started life as a 400-pound chunk of aluminum. After 382 pounds of that metal was milled away the team had a piece that was as stiff as the stock unit. And, crucially, it offers the swingarm angle needed for good mechanical grip as well as hosting the idler gears necessary to keep the drive chain away from the rear of the frame. Footpegs were chopped, saddlebags and bodywork were made out of paper-thin carbon fiber, and countless other tiny details were sorted out over the course of the 2021 MotoAmerica racing season. In the end the team, and Kyle Wyman, won.


There really isn’t any doubting that the series, and the subsequent machines built to compete, are a little off kilter. Still, you’d have to have a heart of stone not to wonder what this bike feels like to ride. Luckily for the curious, Harley-Davidson offered us a leg up onto this Clydesdale of a motorcycle at Inde (pronounced “indy”) Motorsports Ranch in southeastern Arizona.


The Inde circuit was perfect, actually, because anytime I ride a priceless work of competition engineering in front of the nervous team that built it, I always prefer to do it on a 2.75-mile, 21-turn track that I have never seen before and with as many blind corners as possible. Someone from the Harley team also mentioned that this was the bike’s last outing before going to the company museum, which made me feel even better.


Just climbing aboard the bagged beast was an ordeal. At six feet, two inches tall, I could barely touch the ground with one foot. It’s the height, y’see, but also the girth. One of the reasons the bike has to be so tall to achieve 55 degrees of potential lean angle without dragging parts is that it’s fairly wide in the middle. I haven’t had that many people helping me set off on a two-wheeled vehicle since my parents first took the training wheels off my bicycle.


The cockpit is typical of a race bike in many ways — zombie remnants of the standard switchgear on the handlebar and tape holding pieces of plastic together. Then again, most race bikes don’t have holes on the inside of the fairing where speakers used to live. Instead of the Boom! Box Infotainment screen from a street-legal Road Glide, this bagger racer uses an AiM MXS 1.2 unit with a five-inch TFT screen and the capability to capture and display piles of data.


The engine started life as a Screamin’ Eagle 131 Performance Crate Engine from Harley’s legendary Parts & Accessories catalog. In its current state, the team calls the 131R racing mill “similar” to the accessory engine which, after hearing the description, feels generous. Along with all of the fiddling with ergonomics and brazing on longer cooling fins, the pistons are different, the cams are more aggressive, and the fuel injectors are beefier in order to flow more delicious gasoline to those enormous and thirsty cylinders.


That’s just the mechanical trickery, mind you, the team is constantly tuning, learning, and retuning the engine based on racing and testing data. All of that tinkering has led to a refined feel from this mutant engine, which I benefited from while blasting around Inde. In some ways the smooth throttle response and linear thrust makes sense, what with mammoth engine internals and a naturally torque-rich power delivery, but it is especially good. Harley says this bike has no less than 120 foot-pounds of torque on tap anywhere in the revs, yet even picking up the throttle mid corner, knee on the ground, the chassis stays composed and neutral.


Come to think of it, that’s probably the most impressive thing about this monster: how good it feels carving through corners. Flicking from side to side, it feels just about as tall and heavy as it is, and it can get ornery if you ham-fist a quick transition, but peeling into curves and settling onto the edge of the tire is a surprising treat. The tires are standard-issue MotoAmerica Superbike slicks, with a 200-width bun out back. Just watching a rider climb aboard you can see the rear tire flex and distort under the mass, and I thought for sure it would feel gooey and unstable at speed. It doesn’t.


A top contender for worst thing about the bike, practically anyway, is the transmission. It’s a typical Harley gearbox, in so much as you can have it done fast or you can have it done right. Where a typical bagger ride might employ a slow and calculated swing from gear to gear, with a puff of Marlboro Red in the middle, that doesn’t cut it in racing. Shifts have to be deliberate and forceful. Fortunately, it is also a typical Harley gearbox in so much as it’s sturdy. Each Wyman brother reiterated at least once that you can’t hurt the transmission, so go ahead and try if it’ll avoid missing a shift.


It wasn’t the best or worst, but my favorite part was the straightaway. Not because this bike is eye-wateringly fast — with my 200-pound self on board the power-to-weight ratio was similar to a 420-pound bike making 115 horsepower. We’re talking Triumph-Street-Triple fast. But the spectacle is terrific, sitting way up high and pounding out forward motion like a magic carpet on top of a thunderstorm.


To that point, you want good brakes and, in keeping with a factory-prepared race bike, the 300 mm discs and radial calipers are as sharp as an aged cheddar. Yes, it’s a lot of weight to slow down but what’s unusual and unnerving about the braking experience has more to do with the long wheelbase. Where most performance bikes (with good tires on a dry track) will easily lift the rear wheel with the front brake, this bagger will more likely lock the front wheel. That’s according to Kyle Wyman and one particular missed downshift of mine on corner entry. It’s precarious, and for that reason Wyman uses a heavy dose of rear brake to slow the bike and avoid losing the front end. Unique challenges for a unique machine.


Have you ever ridden an elephant? In my limited experience, it is worse than riding a horse in many ways. It’s harder to get on them and farther to fall, they eat more, and they are slower. It’s ungainly and peculiar. But damn, there is something regal about it, too. Feeling those colossal joints thump into place with each prehistoric stride and seeing a landscape you thought you knew from a different perspective is remarkable.


It could be that riding this King of the Baggers Road Glide Special feels significant for the same reason. Because it’s rare, and because unfamiliar feelings are the ones we often remember. And I guess I don’t see anything wrong with that. It’s interesting. Not necessarily in that motherly, disapproving way, but in the truest sense of the word.