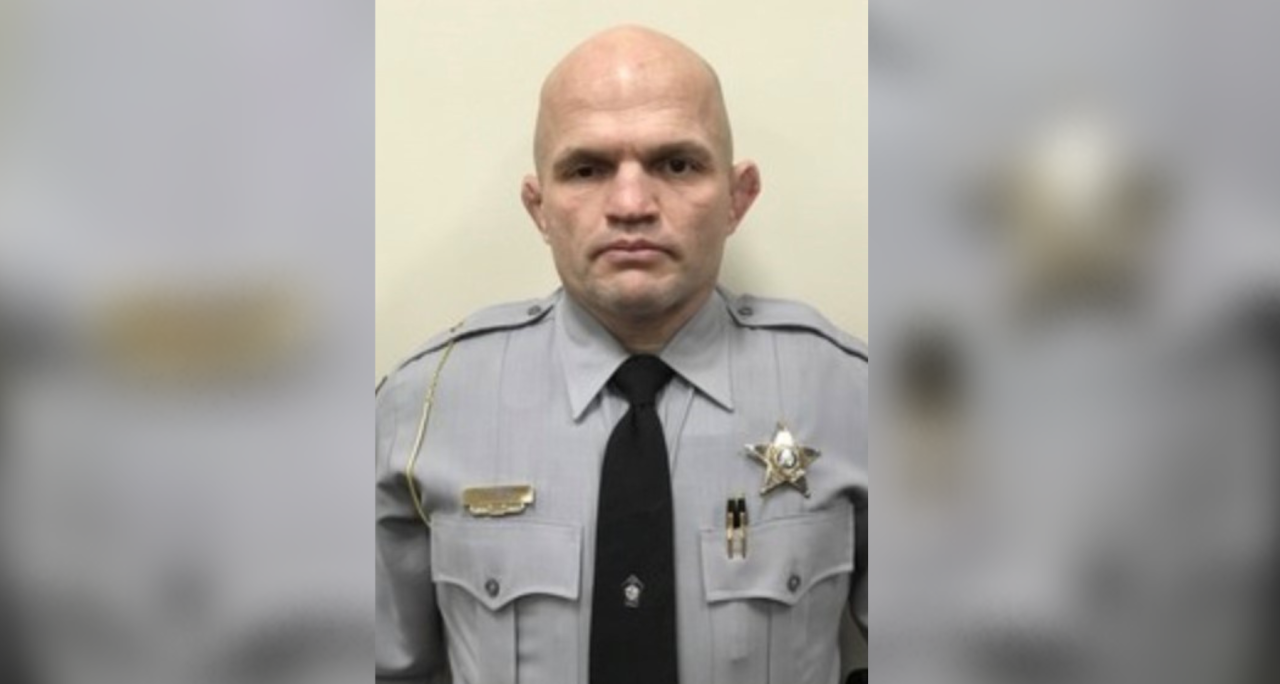 According to the search warrant, Deputy Byrd was on his way to the Wake County Law Enforcement Training Center for K9 training on the night of August 11th. Video from the Marathon gas station at Battle Bridge and Auburn Knightdale roads showed the pickup hitting a fence at 11:03 p.m.

At 1:06 a.m. the next morning, Byrd was found dead with multiple gunshot wounds, including one to the back of the head, near a parked patrol car on the side of Battle Bridge Road in the grass. A 9mm handgun was used in Byrd’s murder.

A dash cam from Byrd’s car showed him pass the pickup and then stop. He was then seen reversing up the road towards the suspect vehicle. At 11:07 p.m., Byrd steered his vehicle toward the suspect and got out to approach the pickup truck.

About 13 seconds later, at 11:08 p.m., “three high-speed weapon shots and three more shots were heard,” according to warrant documents. A minute and a half later, at 11:09 p.m., the suspect vehicle was seen crossing Byrd’s vehicle and turning onto Battle Bridge Road.

Deputy Byrd’s dash cam recorded the scene for two hours, during which time five vehicles were seen driving past the area, the warrants state.

One of the warrants said there was probable cause to search and seize both brothers’ cell phones and their information from AT&T and Verizon. The warrant said investigators were able to request cell tower data for cell phone providers that were in the area the night of the murder.

After analyzing cell phone data, investigators found two phone numbers of suspects who were at the scene of the crime at the time of the murder. The warrant showed the devices were in communication with each other immediately after the crime.

On August 14, investigators requested historical and phone records related to the suspects’ phones. According to the search warrant, a 30-day check of both cellphones revealed that aside from two calls between the brothers on July 25, the only other communication occurred between 4:45 p.m. on Aug. 11 and the afternoon of Aug. 12. The search warrant also revealed that the phones were connected more than 40 times in a 24-hour period.

Further cell phone records also show that Arthur’s cell phone was moved between the crime scene and his residence in Raleigh.

Law enforcement believed that the unknown cell phone belonged to Alesa. Current cell location data indicated that the cell phone was initially located in Winston-Salem before returning to Raleigh on August 14. While the phone was on its way back to Raleigh, it was disconnected.

On Aug. 16, a gold Cadillac Escalade driven by Alder was seen picking up a child and a woman at a residence in Garner. The vehicle then went to Winston-Salem for a DMV inspection and location for a new license plate. The woman then drove the car back to Winston-Salem.

Then it was noticed that the brothers got into different cars and went to two different gas stations on the same day. After getting gas, the brothers drove onto Interstate 40 in the direction of western North Carolina. Law enforcement believed that the two were fleeing the area to avoid being caught.

On August 16, investigators questioned the woman and she consented to a search of a residence in Winston-Salem. While investigators were on their way to the home, they found Rolando Marin-Satella entering the home. He was seen leaving the home with what investigators believe were boxes of ammunition.

Investigators conducted a traffic stop and found Roland with marijuana, 9mm rounds and $5,000. Rolando later revealed that on August 16, he would give Arthur $300 if he sold the Chevrolet Colorado. Images released by the Wake County Sheriff’s Office on Aug. 15 showed images of a Chevrolet Colorado.

The car was sold by Alkhov to an acquaintance on August 16.

Several search warrants were issued on different days to look for cell phone data and information. Investigators also conducted a review of both suspects, including personal information and social media accounts.

On Aug. 16, Arturo told investigators that he and Alder were driving a red Chevrolet Colorado truck together to a field on Battle Bridge Road to hunt deer. Investigators learned that Arturo got out of the truck and walked across the field with an AK-47, while Alder parked and stayed with the vehicle.

According to the search warrant, while Arturo was in the field, he saw a police car in the parking lot and turned on its blue lights where Alder was parked. Arturo told investigators he heard gunshots, after which the car drove off. Arturo then called his brother and said the policeman had been shot.

On August 12, a search was conducted on Battle Bridge Road for evidence related to Deputy Byrd’s murder. Byrd’s gun was confiscated and collected as evidence. The weapon was sent to the North Carolina State Bureau of Investigation for DNA testing.

A second search warrant obtained Alder’s DNA sample. The warrant states there was probable cause to obtain blood, saliva and hair samples for DNA evidence at the crime scene.

The court found probable cause and a DNA search warrant was issued on August 18.

According to a North Carolina State Crime Lab report, the DNA swab from the gun had three profiles: one male profile, Deputy Byrd and an inconclusive result.

Another warrant revealed probable cause evidence to search and seize a red pickup truck that was seen leaving the crime scene where Deputy Byrd was killed.

The warrant states that the red 2005 GMC Canyon pickup may contain evidence and the identity of a person involved in the crime.

Investigators sought to seize documents proving ownership of the vehicle, photographs and an examination of the truck, fingerprint and DNA evidence on or in the truck, weapons, ammunition, shell casings or other evidence related to the investigation.

According to the search warrant, investigators seized extended bullet magazines and a black cell phone with a black case.

A search warrant for the vehicle was executed on August 17.

Another search warrant revealed probable cause evidence that a champagne-colored Cadillac Escalade was searched and seized. Alder was driving an Escalade and was pulled over in Burke County on Aug. 16.

According to the search warrant, investigators planned to seize:

The search warrant states that the investigators seized:

The warrant was executed on August 17.

According to five search warrants, investigators seized five different iPhones and searched the phones for contact information, text messages, phone calls and other apps on the phones.

Four of the phones belonged to Alder:

Cell phones were recovered from the same house.

A black iPhone belonging to Arthur was taken from the Chevy Tahoe on August 18th.

Arthur was accused of murder August 18 and Alder was charged with murder on August 25. Both brothers remain in the Wake County Jail without bond.