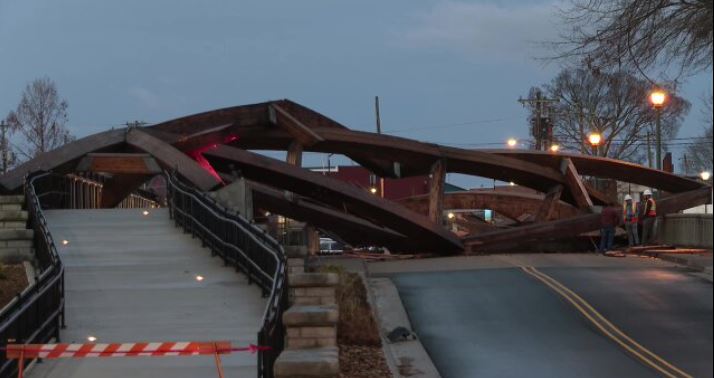 Large wooden arches were central to the Hickory City Walk project, which connects the University of Lenoir-Rhine with the city center. The footbridge crosses the NC 127.

In April 2021 the project hid the checkpoint due to “concerns brought to the attention of the contractor during installation”.

“It’s a matter of public safety.” Hickory police are setting up signs against homelessness to fight homelessness

A city spokesman said the section of the wooden arch had signs of “stress” and construction was halted “due to great caution”. Engineers from the arch manufacturer, Western Wood Structures, inspected the structure and came up with a plan to strengthen it.

“I would hate it to fall on someone under a bridge or on a train. That would suck, ”Hickory resident Emily Seefer told Queen City News in May.

City officials said the “iconic” design cost $ 752,743 and was paid for in a 2014 bond referendum approved by voters.

The official cause of the landslide, which occurred at night, is still unknown. Heavy rain and wind blew across the area Thursday night as the cold front swept through Carolina.