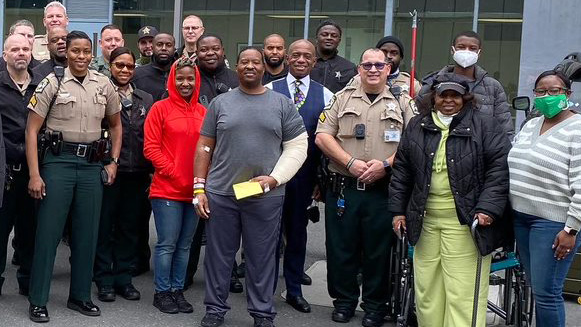 CHARLOTTE, NC (QUEEN CITY NEWS) – A deputy of the Mecklenburg County Sheriff’s Office who postponed an operation after a suspect shot him while stopping at a traffic stop has been shot a total of seven times, the department said Monday, citing more information what happened.

According to the sheriff’s report, the man, who was concerned about his unstable son, left the deputy around 4pm on Saturday on Salami Church Road. While the deputy was stopped and talked to the father, the father watched his son pass by in a car, and the deputy, later identified as Dijon Wims, chased the vehicle and tried to stop the movement.

When the MP approached the vehicle, the driver, 23-year-old Aidan Bryant of Pembroke, started firing and hit the deputy twice in the lower body and three times in the upper body. Deputy Wims opened fire on Bryant, but the suspect was able to flee the scene. He soon appeared in Mallard Creek Emergency Room and was then transported to the Atrium of Maine.

A Charlotte police officer who went to the scene, assisted Wymes and Wymes, was taken to the Atrium of Maine, where he underwent a successful operation on Sunday and was released on Monday.

Bryant remains hospitalized, and after his release warrants were issued for possession of the stolen pistol and attempted first-degree murder. He previously had a warrant for him in the county of Scotland for a stolen gun.