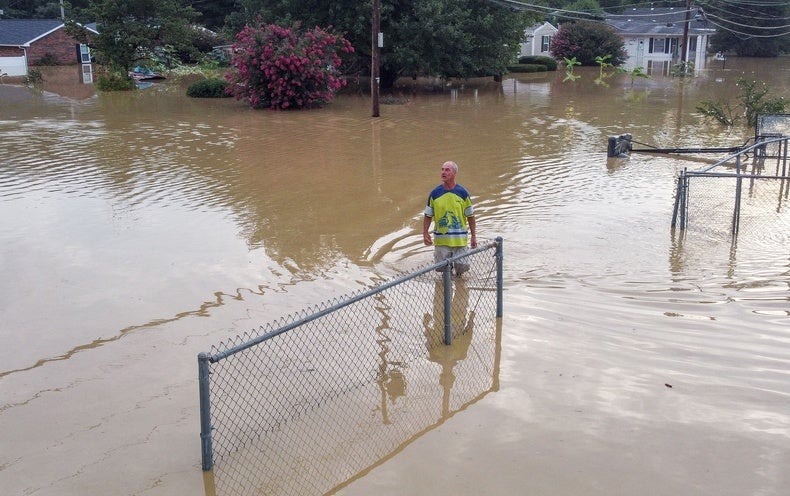 A flash flood is a specific type of flood that occurs within a short period of time after rainfall – usually less than six hours. This is often due to heavy or excessive rainfall and occurs in areas near rivers and lakes, but it can also occur in places where there are no bodies of water nearby.

Floods occur in rural and urban areas, as in late July 2022 St. Louis and eastern Kentucky. If an area receives more precipitation than the ground can absorb, or if it falls in areas with a lot of impervious surfaces like concrete and asphalt that prevent the ground from absorbing the precipitation, the water has little place to go and can rise very quickly.

If the area has recently received rainfall, the soil may be saturated to capacity and unable to absorb any more water. Flooding can also occur after a drought when the soil is too dry and hardened to absorb rainfall. Flash floods common in desert landscapes after heavy rainfall and in areas with shallow soil depth over hard bedrock, which limits the soil’s ability to absorb rain.

As water flows downward, precipitation will seek the lowest point of its potential path. In cities, these are often streets, parking lots, and basements in low-lying areas. In rural areas with steep terrain, such as the Appalachians, flash floods can turn streams and rivers into raging torrents.

Flash floods often catch people by surprise, even as forecasters and emergency officials try to warn and prepare the public. These events can wash cars and even demolish buildings from their foundations.

The best way to stay safe during a flash flood is to be aware of the danger and be prepared to respond. Low-lying areas are at risk of flooding, whether it occurs slowly or quickly and whether it is in an urban or rural area.

Knowing where to get up-to-date weather information in your area is very important. And if you’re out in the open and encounter flooded areas, such as flooded roads, it’s always safer to wait for the water to recede or turn back and find a safer route. Do not try to cross it. Floodwaters can be much faster and stronger than they appear, and therefore more dangerous.

Building for a wetter future

Engineers are designing stormwater control systems to limit the damage that rainfall can cause. Water pipes convey water and help control where it flows, often directing it under roads and railways so that people and goods can continue to move safely. Storm water retention ponds and detention basins hold water for release at a later time after the flood has subsided.

Often the design standards and rules we use to develop these features are based on historical rainfall data for the location where we operate. Engineers use this information to calculate how large a culvert, pond, or other structure should be. We are always building additional capacity to deal with unusually large floods.

Now, however, many parts of the U.S. are seeing more intense storms that dump significant amounts of precipitation in a very short period of time. Recent flooding in St. Louis and Kentucky was of the magnitude that would be statistically expected in those areas once every 1000 years.

With climate change, we expect this trend to continue, meaning planners and engineers will need to rethink how to design and manage infrastructure in the future. But it’s hard to predict how frequent or intense future storms will be in a given location. And while more intense storms are very likely based on climate projections, designing and building for the worst-case scenario is not cost-effective when there are other competing funding demands.

Engineers, hydrologists and others are now working to understand how to better plan for the future, including by modeling floods and development trends, so we can help communities make themselves more resilient. This will require more updated data and design standards that better adapt to expected future conditions.

This article was originally published on Conversation. To read original article.

What is a flash flood?

Source link What is a flash flood?