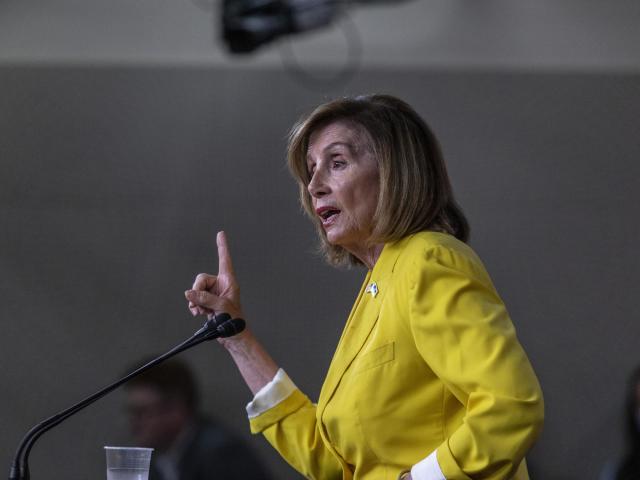 EDITOR’S NOTE: Thomas L. Friedman is a foreign affairs columnist for the New York Times. He won three Pulitzer Prizes. He is the author of seven books, including From Beirut to Jerusalem, which won the National Book Award.

I have a lot of respect for House Speaker Nancy Pelosi. But if she visits Taiwan this week against President Joe Biden’s wishes, she will do something completely reckless, dangerous and irresponsible.

Nothing good will come of it. Taiwan will be neither safer nor more prosperous as a result of this purely symbolic visit, and a lot of bad things could happen. These include a military response by China that could involve the US in indirect conflicts with a nuclear-armed Russia and a nuclear-armed China at the same time.

And if you think that our European allies—who have faced an existential war with Russia over Ukraine—will join us when the US-China conflict over Taiwan arises, sparked by this unnecessary visit, you misunderstand the world.

Let’s start with the indirect conflict with Russia and how Pelosi’s visit to Taiwan is currently looming over it.

There are moments in international relations when you need to keep your eyes on the prize. Today, that reward is clear: we must ensure that Ukraine can at least blunt—and at most reverse—the unprovoked invasion of Vladimir Putin, which, if successful, would pose a direct threat to the stability of the European Union as a whole.

To help create the best possible opportunity for Ukraine to reverse Putin’s invasion, Biden and his national security adviser, Jake Sullivan, held a series of very tough meetings with the Chinese leadership, pleading with Beijing to stay out of the Ukraine conflict by providing military aid to Russia — and especially now that Putin’s arsenal has been reduced in five months of brutal war.

According to a senior US official, Biden personally told President Xi Jinping that if China entered the war in Ukraine on Russia’s side, Beijing would risk access to two of its most important export markets, the US and the European Union. (China is one of the world’s top producers of drones, which are exactly what Putin’s military needs most right now.)

By all accounts, U.S. officials tell me, China has not retaliated with military aid to Putin — at a time when the U.S. and NATO have been providing Ukraine with significant amounts of advanced weapons and intelligence support that has severely damaged Russian forces, China’s ostensible ally.

Given all this, why would the Speaker of the House of Representatives visit Taiwan and deliberately provoke China now, becoming the highest-ranking US official to visit Taiwan since Newt Gingrich in 1997, when China was much weaker economically and militarily?

The timing couldn’t be worse. Dear reader! The war in Ukraine is not over. And privately, US officials are much more concerned about Ukraine’s leadership than they show. There is deep mistrust between the White House and Ukrainian President Volodymyr Zelensky — far greater than reported.

And there are funny things in Kiev. On July 17, Zelensky fired his country’s attorney general and head of domestic intelligence in the most significant government reshuffle since the Russian invasion in February. That would be the equivalent of Biden firing Merrick Garland and Bill Burns on the same day. But I still haven’t seen any posts that convincingly explain what it was about. It’s as if we don’t want to look too closely under the hood in Kyiv, fearing what kind of corruption or antics we might see when we’ve invested so much there. (More on the dangers of this another day.)

Meanwhile, senior US officials continue to believe that Putin is fully prepared to consider using small-caliber nuclear weapons against Ukraine if he sees his military facing certain defeat.

In short, this war in Ukraine is SO not over, SO not stable, SO without dangerous surprises that can pop up any day. Yet in the middle of all this, are we going to risk a conflict with China over Taiwan, provoked by an arbitrary and frivolous visit by the Speaker of the House of Representatives?

It’s Geopolitics 101 so you don’t fight a war on two fronts with two other superpowers at the same time.

Now let’s turn to the possibility of an indirect conflict with China and how Pelosi’s visit could trigger it.

According to Chinese news reports, during a phone call last week, Xi told Biden, alluding to US interference in Taiwan affairs such as Pelosi’s possible visit, “he who plays with fire will get burned.”

Biden’s national security team made it clear to Pelosi, a longtime advocate of human rights in China, why she shouldn’t go to Taiwan now. But the president did not call her directly or ask her not to go, apparently worried that he would appear soft on China, leaving room for Republicans to attack him before the midterm elections.

It is a measure of our political dysfunction that a Democratic president can’t stop the Democratic speaker of the House from a diplomatic maneuver that his entire national security team — from the CIA director to the chairman of the Joint Chiefs of Staff — has deemed unwise.

There’s certainly an argument that Biden should just call Xi’s bluff, back Pelosi to the hilt, and tell Xi that if he threatens Taiwan in any way, it’s China that will “burn.”

It might work. It may even feel good during the day. It could also start World War III.

In my opinion, Taiwan should have simply asked Pelosi not to come at this time. I have so much admiration for Taiwan, the economy and democracy it has built since the end of World War II. I have visited Taiwan many times over the past 30 years and have personally witnessed how much Taiwan has changed in that time – so much.

But there is one thing that hasn’t changed for Taiwan: Its own geography!

Taiwan is still a small island nation of 23 million people, about 100 miles off the coast of giant mainland China, with 1.4 billion people who consider Taiwan part of the Chinese homeland. Countries that forget their geography are in trouble.

Don’t take this for pacifism on my part. I believe that protecting Taiwan’s democracy in the event of an unprovoked Chinese invasion is a vital US national interest.

But if we are going to enter into a conflict with Beijing, at least on our terms and our issues. Our concerns are China’s increasingly aggressive behavior on a variety of fronts, from cyber intrusion to intellectual property theft to military maneuvers in the South China Sea.

However, now is not the time to poke at China, especially given how sensitive times are in Chinese politics. Xi is on the verge of concluding an indefinite extension to his role as China’s leader at the 20th Congress of the Communist Party, expected to be held this fall. The Chinese Communist Party has always made clear that the reunification of Taiwan and mainland China is its “historical task,” and since coming to power in 2012, Xi has relentlessly and recklessly emphasized his commitment to that task with aggressive military maneuvers around Taiwan.

By visiting Pelosi, she will effectively give Xi an opportunity to divert attention from her own failings — a strategy of whack-a-mole in an attempt to stop the spread of COVID-19 by locking down China’s major cities, a huge real estate bubble that is now deflating and threatening a banking crisis and a huge Mt. national debt as a result of Xi Jinping’s unbridled support for state-owned industries.

I seriously doubt that the current Taiwan leadership deep down wants this Pelosi visit now. Anyone who has followed the cautious behavior of Taiwan President Tsai Ing-wen of the pro-independence Democratic Progressive Party since her election in 2016 must be impressed by her consistent efforts to defend Taiwan’s independence without giving China an easy excuse for military action against Taiwan.

Alas, I fear the growing consensus in Xi Jinping’s China is that the Taiwan question can only be resolved militarily, but China wants to do it on its own schedule. Our goal should be to deter China from such military action on OUR timetable—forever.

But the best way to do this is to arm Taiwan with what military analysts call a “porcupine” — a country bristling with so many missiles that China will never want to lay hands on it — while saying and doing as little as possible to provoke China into thinking , that he MUST get on with it now. Taking anything other than a balanced approach would be a terrible mistake with huge and unpredictable consequences.

This article originally appeared in The New York Times.

Capitol Broadcasting Company’s Opinion Department seeks a wide variety of comments and letters to the editor. Our comments next to each opinion column provide an opportunity to participate in the dialogue about this article.

Additionally, we invite you to write a letter to the editor about this or any other opinion pieces. Here are some submission tips >> SEND A LETTER TO THE EDITOR